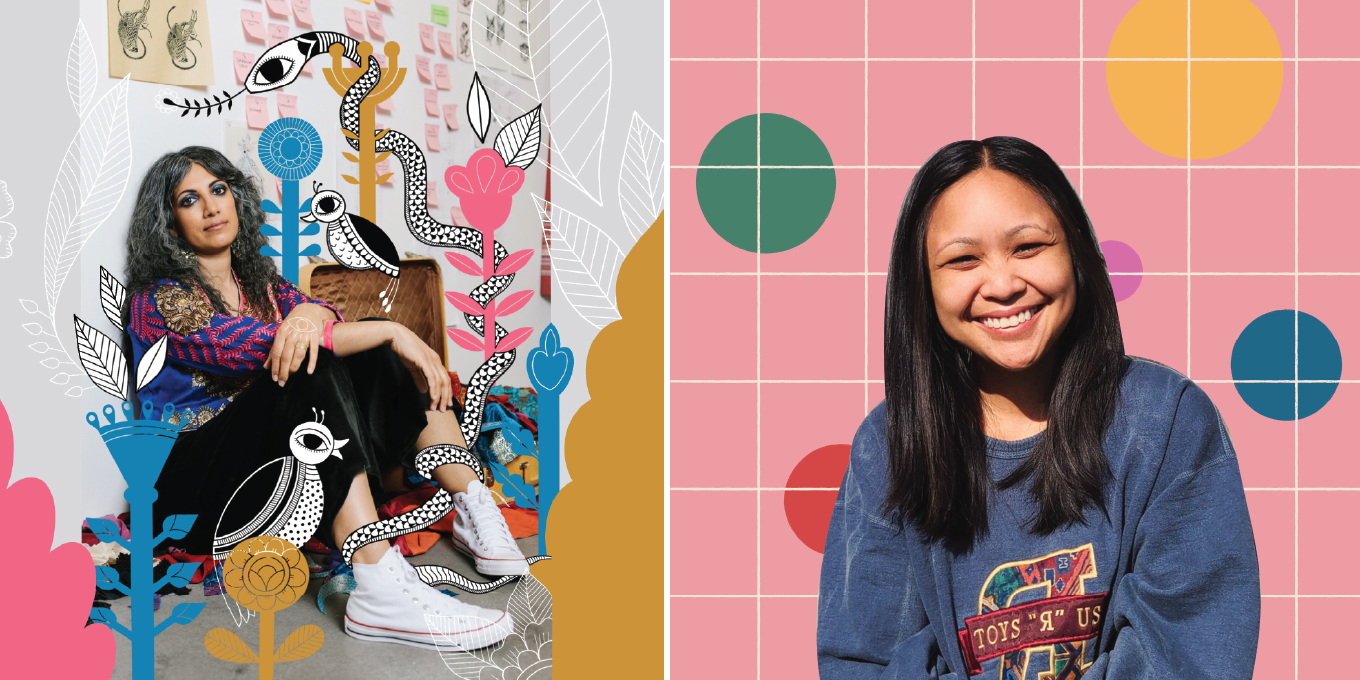 It’s safe to say the arts and activism have always gone hand-in-hand. But across the country, young artists are now layering parts of their amazingly diverse identities into that mix. As a fellow (somewhat confused) third-culture kid myself, your experiences can often feel singular—like we don’t belong anywhere—when, in fact, we belong everywhere.

We spoke to five inspiring artists and illustrators about cultural explorations of identity through art, what to expect from their style and how their work sparks conversation—and inspires change. 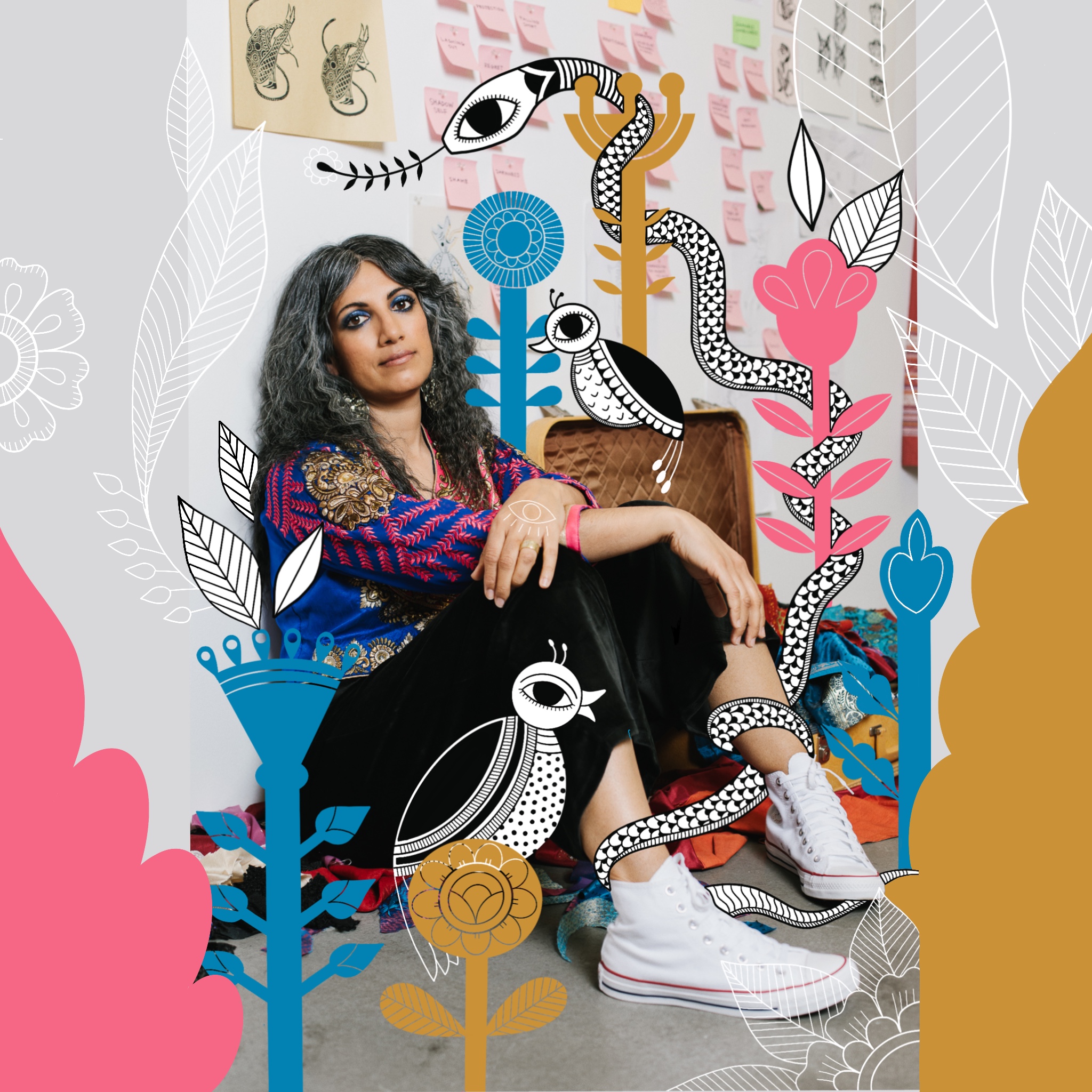 For Kelowna-born, Vancouver-based visual artist and muralist Sandeep Johal, it was the birth of her son that prompted her to become a full-time artist in 2016. “I wasn’t living my purpose and felt I needed to make a change for my son,” she says. Today, you can find the self-proclaimed maximalist’s stunning, undoubtably South Asian murals throughout the Lower Mainland (BC), including the lobby of the Vancouver Art Gallery, which is on display until October 2022. Despite rebelling away from her culture as she grew up, now, Johal wants people to know a South Asian was at the heart of each creation.

Artistic style: “Indo-folk feminine with a contemporary spin. Intricate line work, both organic and geometric, forms the basis of my art—and is often accompanied by bold pops of colour.

Activism: “Growing up, I was acutely aware of the gender disparity within my home, community, and the world at large. I may not like the politics of my heritage, but I definitely like the aesthetics. I’m using one thing from my culture to reconcile another. My work centres around the stories of women, and while I highlight female suffering in its many forms, these are ultimately stories of resistance and resilience. My Rest in Power work [also] honours women who have been murdered by men. My hope is to share their stories, honour their lives, and preserve their legacies while encouraging the viewer to engage in meaningful dialogue around gender-based violence—and ultimately take steps toward eradicating it.” 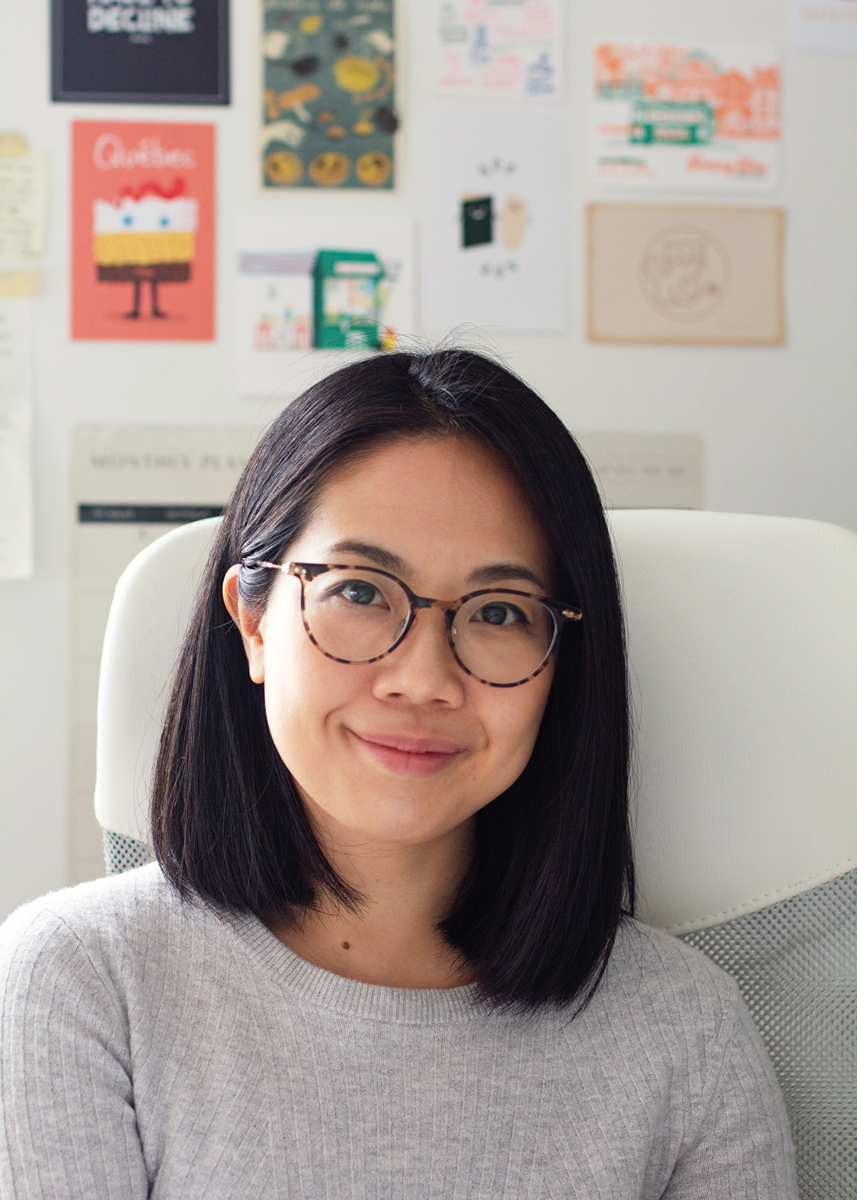 “Culture and heritage can be quickly forgotten and disappear if we don’t preserve and practice them,” shares Montreal-based illustrator Vivian Yu. “My way of preservation is sharing my cultural findings and knowledge through fun, bite-sized visuals.” Inspired by her own Toishanese-Cantonese upbringing, Paper & Rice Co. is here to encourage people to get curious about their East and Southeast Asian roots with cute, playful greeting cards and prints—and a boat load of puns. When Yu’s wildly informative Lunar New Year traditions post went viral in February of 2021, you can say she did just that.

A post shared by Paper and Rice Co. (@paperandriceco)

Activism: “I use art to spread awareness, honour and demystify my culture. And identity when they are constantly mocked, stereotyped, or hated—the more hate there is, the more joy I will create. When #VeryAsian was in the news [after racist critics of Korean American news anchor Michelle Li], it fuelled me to post Lunar New Year food series that highlighted a dish from each country; in my outrage during 2020s BLM, I created a post to encourage the Asian community to step up and be better allies.” 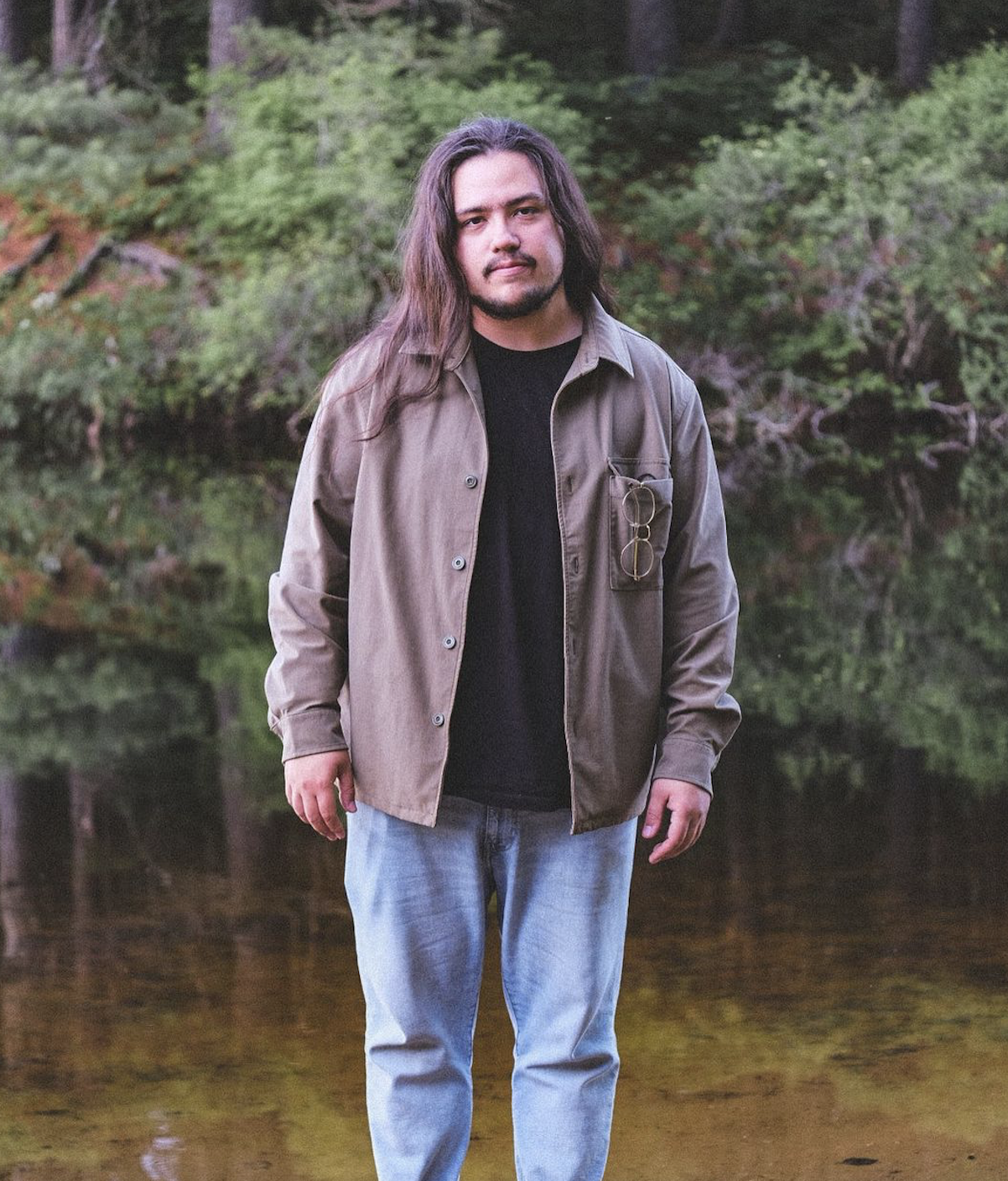 Anishinaabe digital illustrator and muralist Luke Swinson of the Mississaugas of Scugog Island First Nation is constantly finding inspiration from Indigenous artists-past and-present. “When I started my art journey, I would draw animals as a way to learn the [Anishinaabemowin] language,” he says. “I would learn the word for that animal and then draw it.” Whether it is Aki-Earth, Zhashagi-Blue Heron or a bear coming out of hibernation titled, Ziigwan-Spring, Swinson is stimulated “by our resiliency, beauty and connection to the land,” and hopes other Indigenous people will also relate to his works.

Artistic style: “A contemporary take on a traditional Anishinaabe art style. I use flowing lines and earthy colour pallets to portray life and the natural beauty of the southern Ontario landscape. Much of my art is based on the natural world around me, including plants and animals.”

Activism: “Indigenous representation is scarce in my city and region and that had been reflected in my identity. I always felt that my Indigeneity was rooted elsewhere (specifically on Scugog Island). I think about how much it would have meant to me to see Indigenous art in public at a young age. My hope is for our youth to see my art in these spaces and online—and to feel a sense of community and belonging. It is so important for Indigenous people to be occupying these public spaces and my hope is that my voice can be heard through these public works of art. I have many murals around Kitchener and Waterloo that have become symbols of Indigenous presence within these cities.” 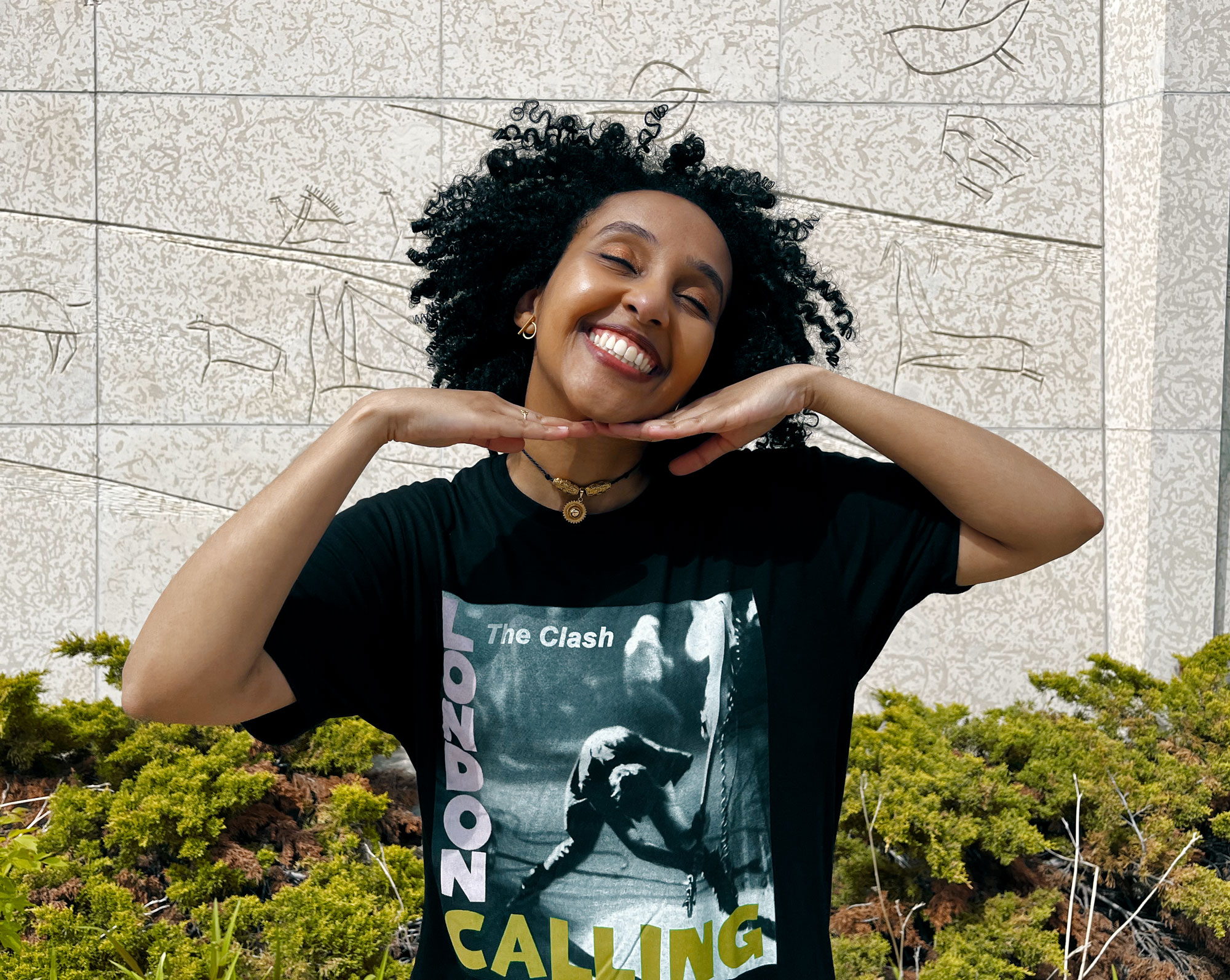 Brnesh Berhe is an Eritrean-Canadian graphic designer and illustrator in Edmonton, Alberta. Growing up in a household where social issues were discussed, “I’ve never understood when people say, ‘they’re not really political’ because it doesn’t feel like we have the option not to be,” she says. “As I get older, I’m less and less concerned with how it may negatively impact my career, especially living in a conservative province,” she adds. While personal projects that touch on her culture have been on-hold, she has begun exploring Eritrean and Ethiopian tattoos. “I’ve always loved them, but there’s very little out there about the history and the origins of the markings.”

Artistic style: “Bold or bright, flat colours. Cartoonish. Where possible, I try to infuse humour in it as well.”

Activism: “I don’t consider myself an activist. I just make things based on what I feel: be it ridiculous or political—and often those things overlap. During the pandemic, I started making quick little illustrations on Instagram responding to what was going on in the world at the time—and [in particular], what was going on here in Alberta with the Conservative government in regard their utter lack of leadership since taking office. I got out what I felt; it seemed to resonate with people. Not all topics can be funny—and not all my work is—but sometimes I like being able to find the absurdity in the things that upset me; maybe subconsciously it was a way for me to deal with everything going on.” 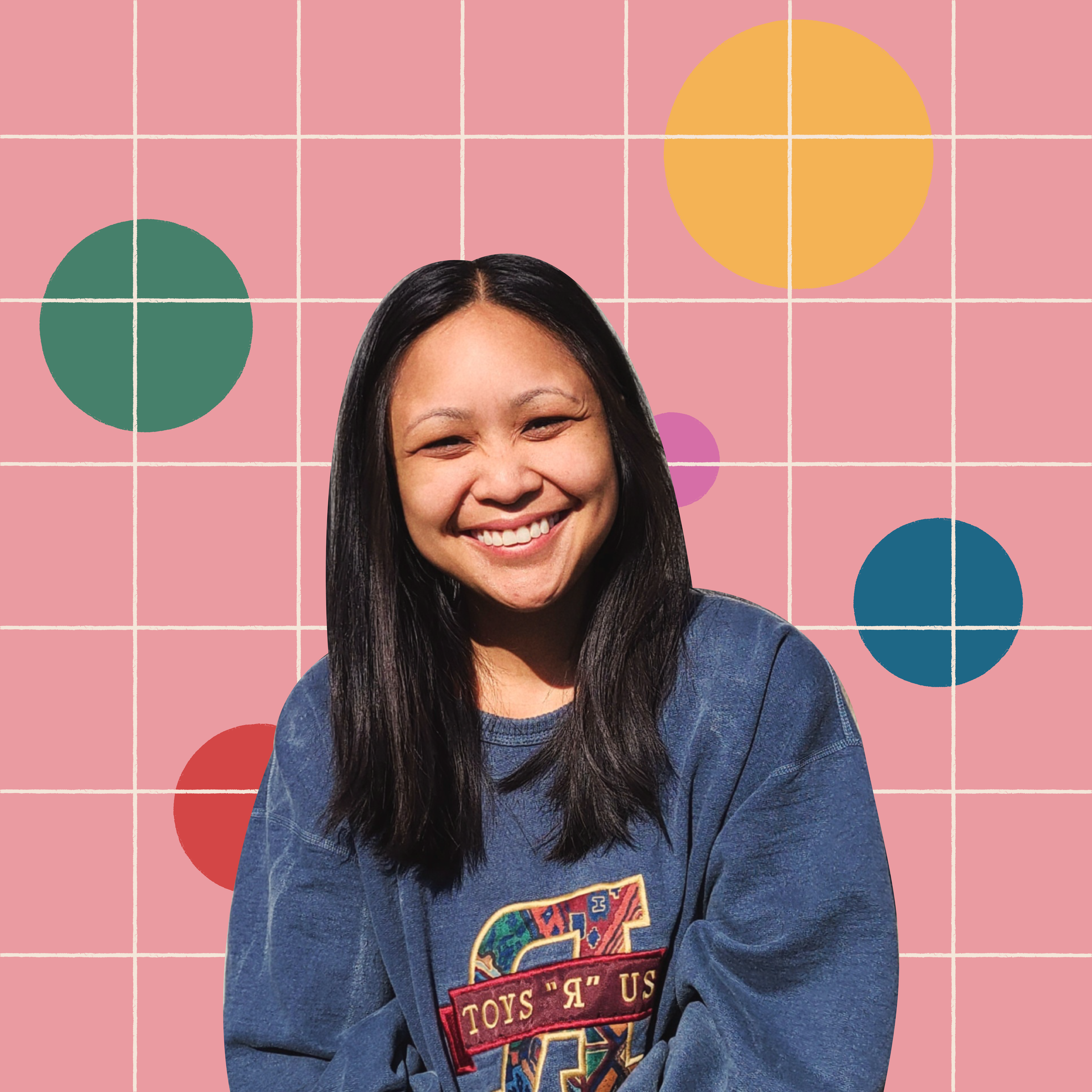 Over in the Greater Toronto Area, Carmen Jabier is the brains behind Mad Love Creative Co., an online retail shop for prints, cards and stickers (to name a few), plus a design studio. “Much of my work revolves around mental health, memories and [my Filipina-Canadian] heritage—and I can’t say no to a good pun!” Objects and memories—from living in Canada to visiting her familial roots in the Philippines—feature heavily in Jabier’s work and influence how she tells stories. “Many of the references are relatable to my audience, which helps drive the point of each piece home,” she explains.

Artistic style: “Playful, colourful, thoughtful, nostalgic. I aim to use bright colours and playful designs—often incorporating a humorous phrase to catch the viewer’s attention—then do a deeper dive into the topic in my caption.”

A post shared by Art by Carmen Jabier (@madlovecreativeco)

Activism: “’The ‘Walk, man!’ design based on the iconic Walkman CD players of the early 2000s, encouraged people to take a walk; the ‘Jusko day’ design—a phrase meaning ‘Oh my god’ in Tagalog—[was] matched with [the] popular Filipino banana ketchup brand, Jufran; the Magic 8 Ball with an Earth design on it, talked about climate anxiety and how we don’t need a Magic 8 Ball to tell us that the current state of the planet is ‘not so good; the retro Band-Aid tin that says, ‘The New Generation’ on it, talked about healing from generational trauma—and growing up in a culture that is, in a lot of ways, not open to topics [surrounding] mental health.”