Thanks to Canada Goose, we got an up-close look at these animals who are particularly vulnerable to global warming. 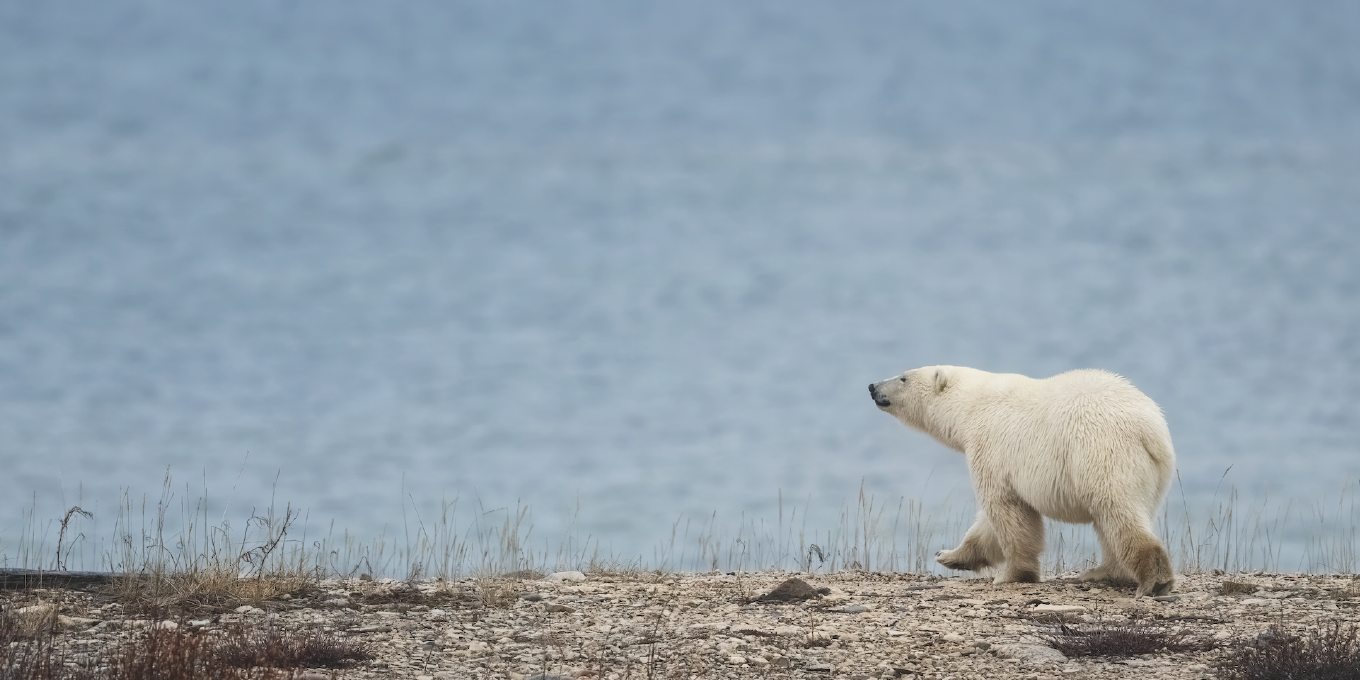 For nearly 15 years, Canada Goose – a partner and major sponsor of Polar Bears International – has supported the research of this organization that works to protect polar bears and their habitat in Canada and around the world. In Churchill, Manitoba, we learned more about this important mission and got an up-close look at these animals that are particularly vulnerable to global warming.

Starting from the hub of the aircraft that left Winnipeg, the landscape becomes lunar as you approach Churchill. The scenery is bare, flat to the horizon, dotted with clumps of coniferous trees. Grey, abstract patches on the white snow. The sun makes an attempt to break through the thick layer of clouds, and only the thin band of blue sky in the distance is there to remind us of the existence of a colourful world. The eye encounters nothing else in this sub-arctic region until a road comes into view, a single furrow that shares evidence of human activity.

Nestled on the shores of Hudson Bay, Churchill is a de facto anchorage point, with a major port for maritime trade. Located on the Northwest Passage route, it connects the Atlantic and Pacific Oceans. But that’s not why tourists flock to this village of about 900 inhabitants every autumn. The place is first and foremost known as the “polar bear capital of the world”, where it is possible to see this wild animal on land before the ice pack forms and before the animal goes off to hunt for many months far from shore. 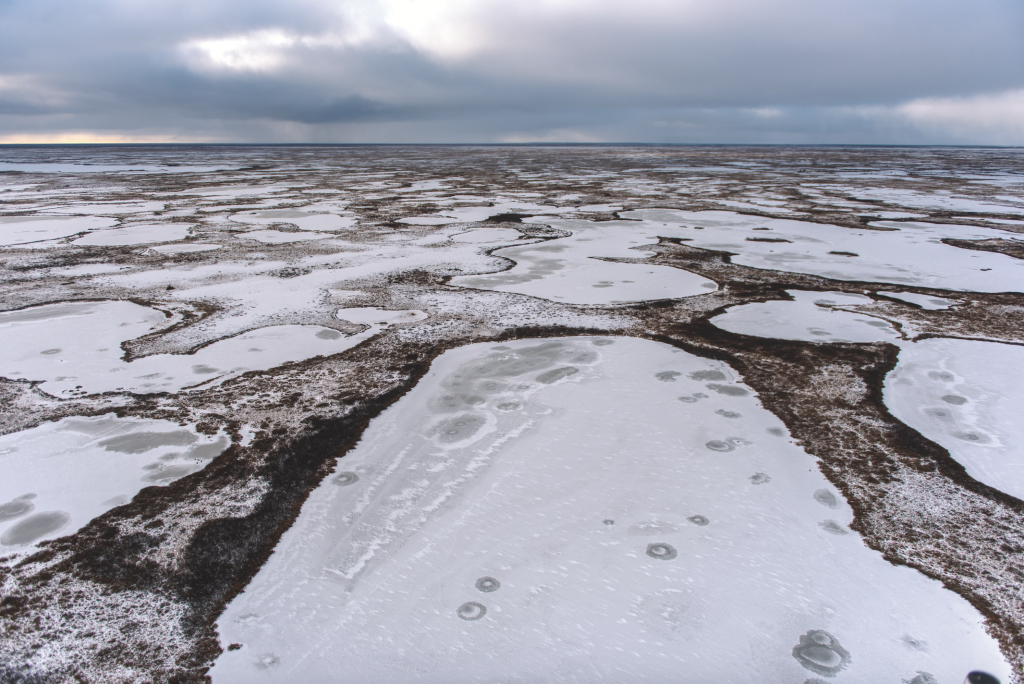 For the Protection of Polar Bears

As we leave the plane, the temperature is just below zero. It is the beginning of November, and the climate is particularly mild for this time of year. An anomaly that is becoming the norm, as we will often hear during our stay. Here, the effects of climate change are being felt considerably. To better understand the extent of the disaster that is gaining ground every year, one must visit the Churchill Wildlife Management Area, a natural area where taiga and tundra meet, and which is home to a large number of wildlife species, including polar bears, which normally return to the mainland in early summer and remain there until the following autumn.

Only three companies are allowed to take tourists into the protected area. One of them, Frontiers North Adventures, is behind the creation of the Tundra Buggy®: these off-road vehicles made for extreme conditions criss-cross the roads in search of these creatures whose creamy-white fur barely stands out from the thin layer of snow covering the ground. The roads are barely recognizable as such, as these makeshift paths, carved out by the years and the passage of these trucks, are now eaten up by puddles the size of a pond.

Polar Bears International (PBI) also has a right of passage aboard the Tundra Buggy® One, offered by Frontiers North Adventures. This non-profit organization, formed by a group of scientists, activists and volunteers, supports research and takes part in programs to raise awareness of the situation of polar bears around the world in order to ensure their conservation and long-term survival in the face of climate change that is disrupting their ecosystem. In the field, PBI collects and analyzes data that is used both to learn about the actual population of these mammals and to find effective solutions for keeping them away from communities close to their natural habitat, whether in Canada (where two-thirds of the world’s polar bears live) or in one of the four other countries where they have been identified: the United States, Greenland, Norway and Russia.

Canada Goose, PBI’s major partner and sponsor since 2007, supports the organization in its various activities, including donating a portion of the proceeds from its Polar Bears International clothing collection, which features electric blue jackets and coats with the PBI logo. “The wildlife, people and landscapes of the North are of vital importance – what happens there affects us all,” says Gavin Thompson, Vice President of Corporate Citizenship at Canada Goose. “We see it as our responsibility to play a leading role in driving change, making an impact and helping fight climate change.” To underscore this vision, the brand has donated more than $3.5 million to PBI to date, and funded the construction of the Polar Bears International House in Churchill, which houses a polar bear education centre that is open to the public and accommodates scientists and guests of the organization as needed. 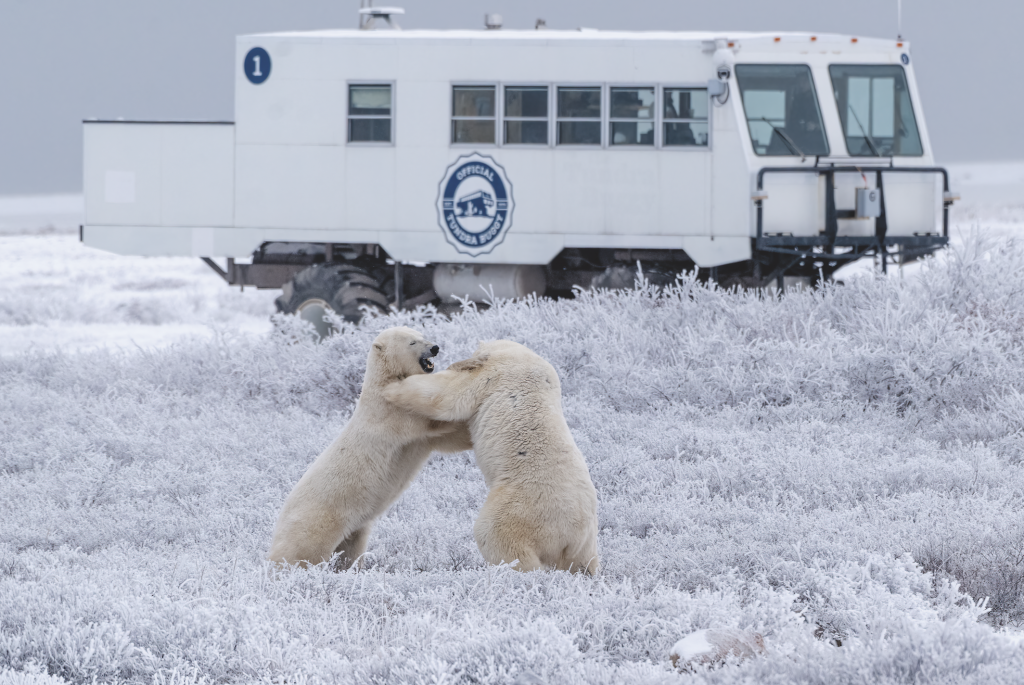 The Importance of the Ice Pack

We have been driving the Tundra Buggy® One for about an hour – the cruising speed is around 10 km/h because it’s so complicated to adapt to the hostile land here – when the animal appears for the first time. It is a young bear, more like a cub given its size, closely followed by its mother who will protect it fiercely until it reaches the age of three. During the day, we will see other of these creatures, from near or far, in groups or alone, napping in the bushes or fighting indolently (at this period of growth, it is still a game, in preparation for the real, brutal fights that will take place in the spring, to attract the favours of a female).

The image is exceptional: to be able to admire this animal in its natural environment does not happen every day. But the reality hides a darker picture. At this time last year, the ice pack – which forms when the surface of the sea freezes – was already there and no bears could be seen on land. However, global warming delays its formation every year, and this November is a new record. For a week now, temperatures have been below zero, but the elements necessary for ice to form have not yet been met. That’s because it takes at least two weeks at -15 ⁰C for the frost layer to spread over Hudson Bay. Without this, the bears cannot leave the shore to hunt seals, its main food that allows it to store enough fat before returning to land when the ice pack melts, normally in early summer. It will then remain on the shore without eating until autumn, in a state of roaming hibernation.

But it’s not just the creation of the ice pack that’s the problem today. “In Western Hudson Bay, the melt historically started around July 15, but we’re seeing it happen earlier and earlier,” says Alysa McCall, Staff Scientist and Director of Conservation Outreach at PBI. “In 2021, for example, it happened on June 15.” And as of early November, the region’s polar bears – which lose an average of 1kg a day while on land, where they spend about a month longer than their grandparents – have not eaten in 146 days. At the critical 180-day mark, 21% of adult males and 63% of juveniles are at risk of starvation. So there’s only a month left for this to change— and quickly. 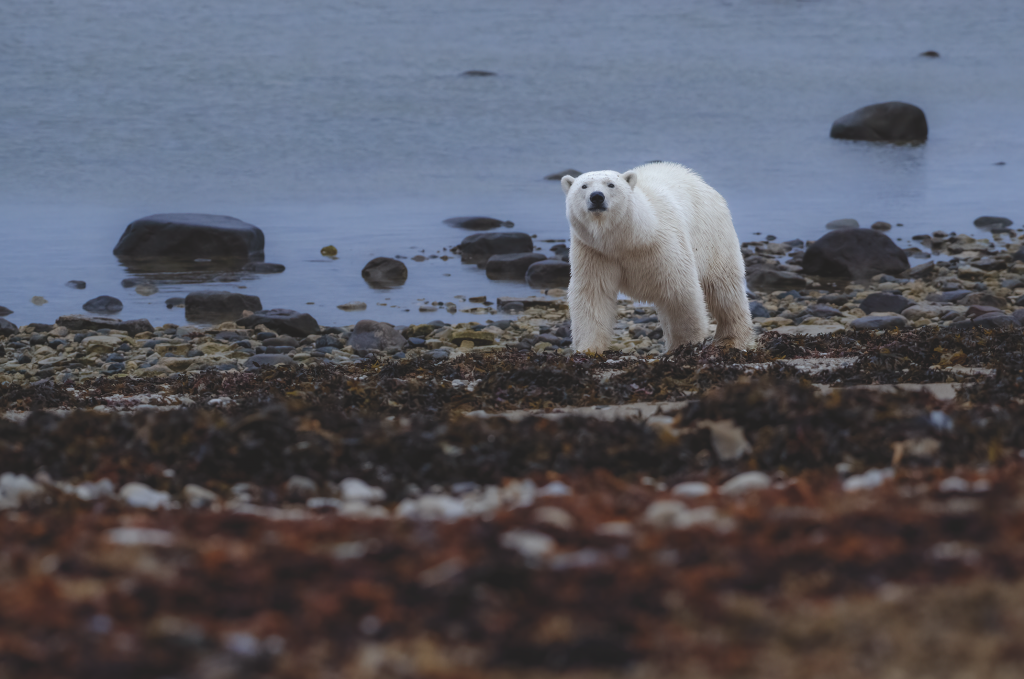 In search of food, polar bears sometimes venture into Churchill, endangering the local population. From morning until 10pm, when an alarm sounds throughout the town to warn of the end of the watch, a patrol – ready to draw its hypodermic rifle, which will administer a dose of tranquilizer to this animal – watches the streets. In the shops, signs are there to indicate what to do: avoid walking alone and be prepared for an attack if a bear comes near you. As we look at the bears we pass in the Churchill Wildlife Management Area, sheltered in our vehicle, we think that we have little chance of getting out of this hypothetical situation alive. The longer it takes for the ice to form, the greater the chance of encountering a bear in Churchill and other northern towns.

Moreover, the lack of frost in Hudson Bay does not only affect the animal: the entire food chain is affected. In fact, the seemingly lifeless ice pack is a fertile ground for algae, which grow beneath its surface. These algae feed diatoms, single-celled microalgae, which feed on small crustaceans called copepods. These are the main food of polar cod, which are eaten by seals before being eaten in turn by bears. Nature is a well-made but precarious balance, endangered by climate change, the effects of which are felt more deeply year after year. Without ice, there is no seaweed and, ultimately, no seals or bears.

But after all, why should we worry about a problem that is thousands of miles away? First of all, our world would not be as rich and wonderful if we let the animals disappear,” says Dr. Thea Bechshoft, a Staff Scientist at PBI. “Secondly, if we protect the polar bears, it means we are also protecting the ice pack, which functions as the planet’s air conditioner. This huge white reflective surface helps the Earth to cool down not only in the Arctic region, but all over the world. When there is no ice, the dark ocean absorbs more light and more of the sun’s heat, which creates large fluctuations in weather patterns and makes them very different from what we know.” 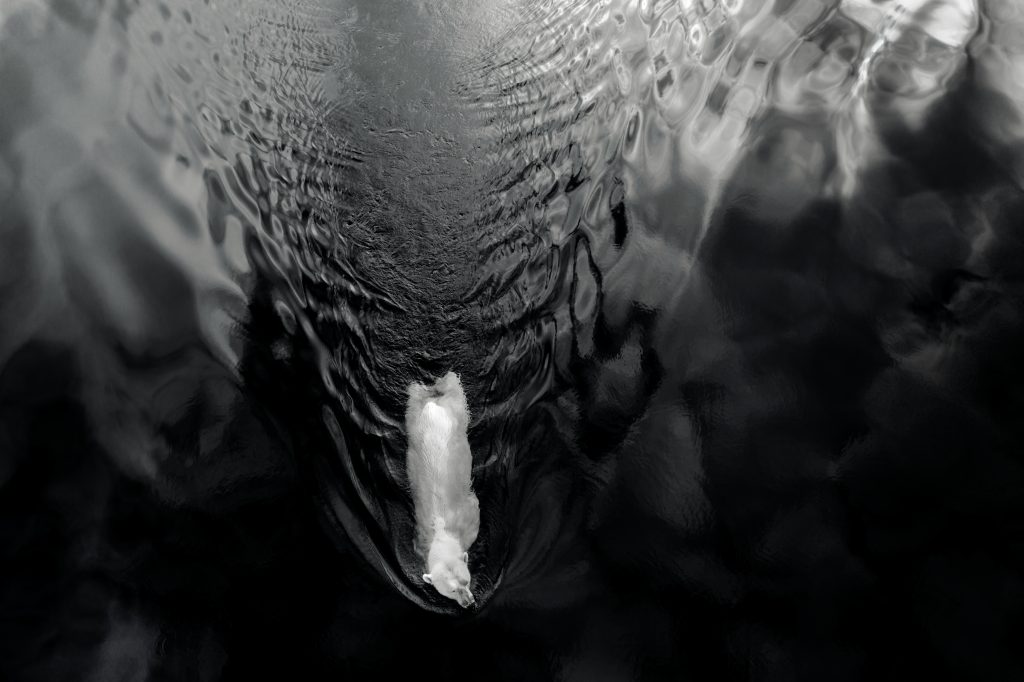 There is still hope that things will improve for polar bears, Arctic wildlife and the planet. It is a hope that is still tangible, but it must be acted upon quickly. Ultimately, it is up to governments to commit to environmental protection. In our democratic societies, we can do our part by using our right to vote to elect politicians who care about the environment and then hold them accountable for walking the talk. We can also prioritize renewable energy in our daily lives, donate to PBI and other environmental organizations, and use our purchasing power wisely, by financially supporting brands, companies and organizations with real and well-documented green values and actions. The Arctic is warming about three times faster than most other places on the planet,” adds Thea Bechshoft. But we have all the tools to turn things around. What is needed now is a rapid transition away from fossil fuels and towards sustainable energy resources, such as wind and solar power. It will take time, but the climate will respond; if we manage to stop the temperature from rising further, the ice pack will come back!” And the polar bear population – which has declined by 30% in Hudson Bay since the early 1980s – will increase again. The science is clear.

By then, the frost will have been slow to come again this year. In Churchill, it took until the very end of November for the ice pack to begin forming. A sad record that, if nothing changes, will become the norm until this sea of ice – and its majestic white-furred creatures – are a distant memory—More than hoping it never happens, it is crucial to act now.