The blonde and busty archetype is back to spread a new loud-and-proud message. 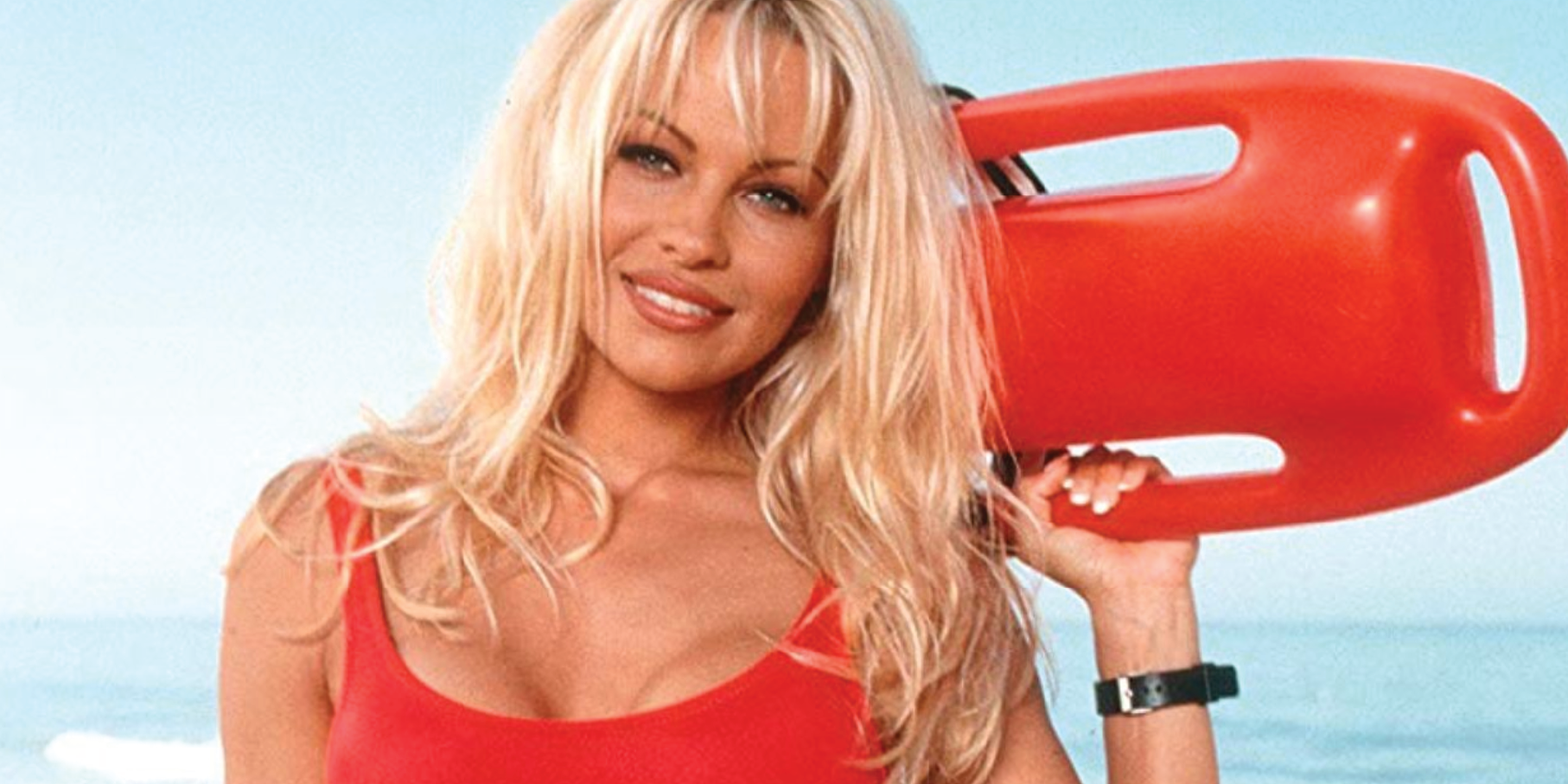 The 1990s imprinted many of our brains with the image of Pamela Anderson running in slow motion on a beach in Baywatch, and the word bimbo stuck to her like glue in tandem. However, the star famed for Playboy, breast implants and long golden locks was far from the first persona built on a pretty-but-dumb stereotype. When Marilyn Monroe played Lorelei Lee in Gentlemen Prefer Blondes, she quipped “I can be smart when it’s important. But most men don’t like it.” Bimbo (a word actually derived from the Italian for ‘baby boy’) quickly became a term flung around as a derogatory slur (we’ve collectively mocked this archetype through public takedowns à la Paris Hilton and Britney Spears). The bimbo has also been shown love throughout the years too, with the likes of Elle Woods who took Harvard Law by storm in Legally Blonde and the iconic Dolly Parton who became one of the most successful women in the United States after being born into a poor family of 12, presently owning over 300 wigs and an eponymous theme park. Now, the bimbo is back, merging with the rising popularity of the more aesthetic-focused barbiecore, and the much talked-about-hot-pink-splashed film Barbie starring Margot Robbie as the eponymous doll.

Yet it’s on the even smaller screens of our smartphones that the bimbo moniker is being reclaimed through social media, as content creators tag their posts with #bimbotok. This time around, the archetype is redefining itself with a whole lot of humour, a touch of revenge and confident ownership of the term. In these online spaces, the figure is going over the top with head-to-toe pink, glitter galore, plenty of skin on display and outlandish fashion to make a loud, self-affirming statement, all while knowing exactly what they’re doing. “When you’re socialized as a female in our northwestern societies, you’re quite often [told to] tone down your voice, be soft, be nice, quiet, and don’t take up too much space. This form of performance and expression is totally the contrary, it’s radical in a way,” says Mélanie Millette, a professor at the Université du Québec à Montréal who specializes in how minoritized people and women use social media for political and identity recognition. Griffin Maxwell Brooks—who is transfeminine and non-binary, is at the nexus of the trend’s revival and birth of the bimbocore movement—emphasizes that the Gen Z bimbo revival is feminist and open to all: “It’s another way that we are dismantling patriarchy and these misogynistic views, by not constraining womanhood to one thing and embracing it, but rather opening the door to all forms of expression of femininity and gender in general.”

Brooks shares the crown of social media bimbo royalty with Chrissy Chlapecka who has more than 5.1 million followers on her TikTok account where she’s splashed head-to-toe in baby pink. Chlapecka dove head-first into the bimbo lifestyle when hateful comments (mostly from cisgendered hetero males) left on her videos, which used to have strong anti-Trump and anti-capitalist leanings, focused mainly on her looks. This is when she released her self-aware and instantly viral “Who is the Gen Z Bimbo” video in which she breaks down her ethics and values, all delivered in the signature breathy voice that spurs the haters on.

Commenters constantly question Brooks’ intelligence too, claiming that they could never attend Princeton as the mechanical engineering student they in reality are. Brooks also does not hesitate to bring their signature style to school: “They say you can’t have open toed shoes [for safety reasons] and there are certain accessories you can’t have, but there’s no guideline as to how shiny something can be or how pink something can be,” says Brooks about their on-campus fashion. “I used to describe myself as a club kid because I work in nightlife, so that’s part of my identity. It’s dressing to shock, like existence as protest.” With over 1.1 million TikTok followers, they often use the newly coined term bimbofication and they’re always sure to stand out in extravagant outfits, calling this movement—defined by not giving a crap and celebrating sexuality—post-modern. It’s their equivalent of throwing glittery stones at the patriarchy, while also dismantling our female preconceptions of the bimbo. Millette points out a parallel between #bimbotok and drag performances where everything is deliberately over the top and designed to loudly take up space often deprived to the performers, which resonates a lot with Brooks’ online persona that they call an extension of their personality.

The evolution of the trope and reclamation of the term beyond a gender binary seems like a natural progression according to Héloïse Michaud, a political science doctoral candidate at Université du Québec à Montréal who studies anti-feminist uses of social media: “It’s the same as [being called queer], it was thrown at them as an insult first and then people were like, ‘you know what, I’m going to claim this for myself,” says Michaud.  By inviting us into their bedrooms and homes to check out their latest bimbo looks, these content creators are also redefining normal. “The social norms of what is ordinary and mundane are so strong,” says Milette.  “It’s a mom and a dad in a house and a car and a dog and two kids.” Even when this reality is queered in mainstream media, it’s often shoving people with different lifestyles into that heteronormative box, missing the point of diversity entirely.

Millette also emphasizes that this celebration and revival of the put-down figure also comes with some touchy caveats. “It’s twisted, complicated, and there’s a tension because it reaffirms so many problematic things at the same time, but there’s also something interesting going on.” The Be A Bimbo merch account, which has nearly 70k Instagram followers, blurs the line further by taking physical aesthetics to a fully blown-out level where reality or passing as natural is not on the agenda, and plastic is a goal rather than an insult. Talking about the page’s exaggeration and hyperbolic dimensions, Millette says they seem to act as an invitation to think about them by being so in-your-face, making us draw our own lines and be confronted with our own notions of acceptability. The brand’s owner Alicia Amira is vocally proud of her fake appearance and transformation towards becoming, in her words, “a plastic bimbo fuck doll.” The account is splashed with sex and sex work positivity, with slogans like “You say sex work like it’s a bad thing” printed on tank tops. It’s also packed with self-aware humour, includes many people of colour, plenty of goth gals, porn stars praising and embracing their lifestyle and even the odd stretch mark. However, captions like “Take me back to the 80s where the boobs were big and the bimbos were skinny,” along with making a pretty penny off t-shirt feminism by selling crop tops for $40 a pop, can leave a familiar sour taste because of the marketing of female identity and sexuality.

Millette reminds us that with “the body positivity on [Instagram and TikTok], certain types of bodies are more positive than others in the eye of the algorithm.” Michaud also points out that, ultimately, Instagram is owned by Mark Zuckerberg and TikTok is helmed by an obscure Chinese firm. Though bimbocore is a movement in which people can express themselves to the fullest and see their identities finally represented, loud and proud—which can have huge personal benefits—there’s still something that sits uneasy about the frame they operate within. “We have to distinguish between the individual level and the structural level, to the degree where […] the choice is always taking place within some cultural constraints that nobody chooses,” says Michaud.

Bimbos can maybe hope that, one day, Pamela Anderson or Dolly Parton will own a social media platform and then, they will truly reign supreme. In the meantime, it’s good to critically examine the complexity of positive self-expression and the promotion of problematic beauty standards, while asking questions that may throw our biases and values right back at us.