The Montreal-born artist, known for her satirical sense of humour, hyperrealism and love of food, has recently released Second Nature, a new book showcasing her recent work. 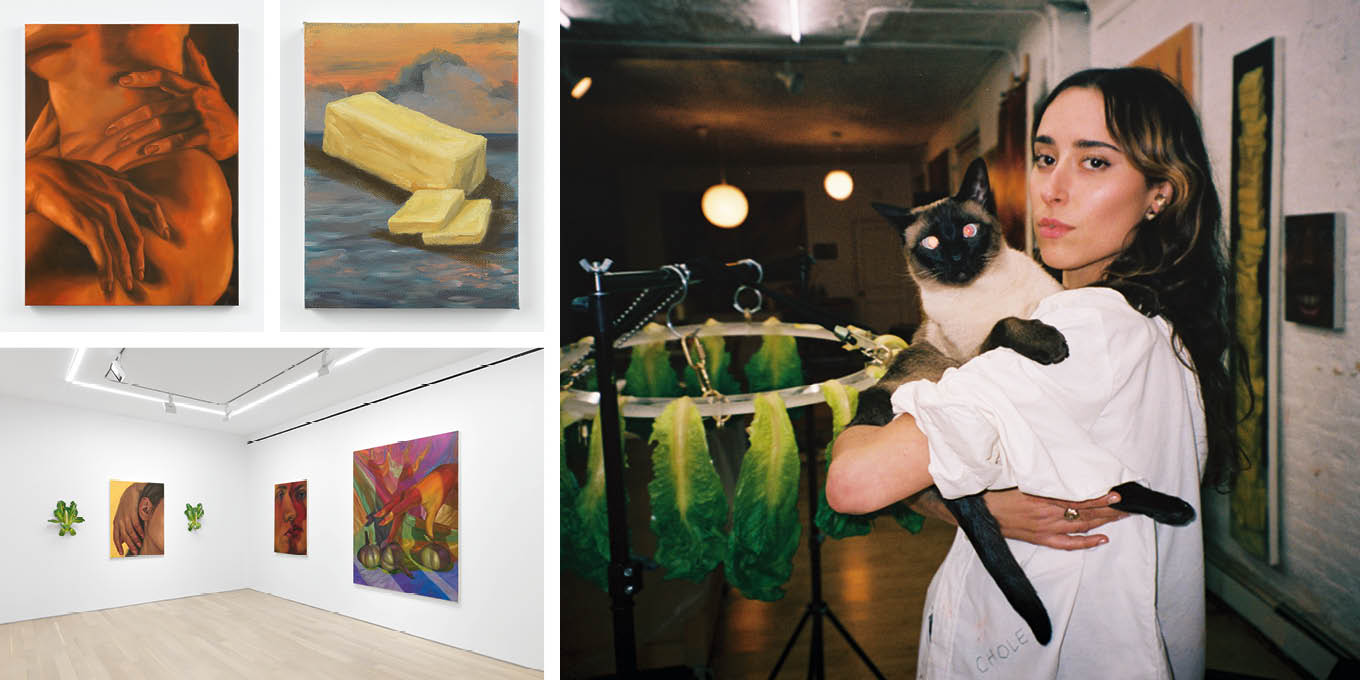 Over the past few years, Chloe Wise’s career has skyrocketed. Her striking collection of works—which features a who’s who of New York’s art and fashion scenes, outlandishly playful sculptures (think Caesar Salad Chandelier) and video essays—has been internationally lauded, even landing her collaborations with fashion houses like Jacquemus and Études Studio. Now, the New York-based artist has released a follow-up to Chloe Wise, her 2016 art-book debut. Second Nature is a 432-page monograph that looks back at the past five years of her career, including solo exhibitions with Almine Rech Gallery, images from her studio, works in progress, film stills, essays and documentation of two museum shows. We connected with Wise to discuss her book, the vulnerability that comes with learning in the public eye and what it’s like to create during a pandemic.

Second Nature was also the title of an online show you had in which you exhibited a collection of paintings you did during quarantine. What does that name mean to you?

“When I used that title for my online show, it was during the early months of the pandemic, when we were getting used to existing and interacting through digital mediations—normalizing Zoom birthday parties, hanging out through video chat and ‘attending’ exhibitions virtually. Saying that something is ‘second nature’ often means it comes naturally, but I began thinking of the term as if it were describing a secondary layer of nature or a nature that achieved a silver medal. What, then, is our first nature? This book, which spans five years, feels a bit like a diary in that it documents the things I do and make quite naturally, which is my second nature in that original sense. Also, quite simply, it’s my second book.”

What kind of evolution have you observed in terms of your art and the themes you’ve explored over the past five years?

“There’s something very vulnerable about compiling this many years of work into one document because you really see the technical evolution of my grasp on the medium of painting. It’s a little like learning in public, and, frankly, it’s embarrassing, but it also feels like a cathartic overshare. I’m happy to present both unfinished and unresolved work alongside more technically [successful] and cohesive work. If anything, it feels like giving myself permission to keep evolving and to maintain ownership of or satisfaction with work I may otherwise be embarrassed by. Thematically, I do think my work has consistently explored the same topics and questions for the past 10 years—and even some of the same sitters and subjects—despite the visual imagery changing at times. Many of my shows, when treated as a chapter or body of work, explore themes of power, desire, manufacturing of consent, sexuality and so forth using the imagery as a vehicle.”

How has the pandemic affected your work?

“I was given the gift of time and silence, wherein I was able to work as many hours as I wanted to work, undisturbed by things that would usually distract me. It was very emotionally difficult to be alone and painting while internalizing all of the crises and painful statistics without the usual distractions that a social life provides. But that pushed me to ‘do the work,’ as they say, and learn, like, all of American history via audiobook while painting.”

It seems like your career really took off after you moved to New York. Why do you think that is?

“Canada—and, frankly, most countries aside from the U.S.—is quite regional, and there isn’t much room for international aspirations or megalomania. When I moved to New York, Canadian galleries were suddenly interested in exhibiting my work, even though I’d been making the same work when I was in Canada. New York pushes you so hard because everyone is from somewhere else and everyone is open-minded to what others are creating, because America, as [French sociologist and cultural theorist] Jean Baudrillard puts it, is a completely amnesiac culture, where no one has a background and individuals can just pop up and exist. There’s a total creative freedom in that.”

Your work often features close friends. What do you hope to capture when you paint someone you know?

“Their gaze, their likeness. I would like to eventually get away from being so tethered to capturing a subject’s likeness, but when it’s a friend, I really want to do them justice. Often, I work with friends to determine how they want to be portrayed. I would never want to paint someone I care about in a manner that felt to them as if I didn’t ‘see’ them.”

Your paintings also feature a lot of food, and you seem to cook a lot. Why is food such a central theme in your art?

“Food is a central theme in life, babe.”

Your art and your social media presence are very funny and satirical. What role does comedy play in your practice and your work?

“Like food, comedy plays a huge role in life! I mean, laughter— what even is that? It’s uncontrollable, like yawning. Both of those human actions are evolutionarily necessary and serve a purpose: to unite us and to dissipate tension, violence and abjection.”

What projects are you currently working on?

“Short term, a sourdough sesame focaccia coming out this evening or tomorrow morning, depending on the fermentation time. And long term, I have a few upcoming solo shows.”

Read more:
What the ELLE Canada Team Is Loving in December
Parachute: A Retrospective on the Fashion Brand Who Challenged the Status Quo
Artist Renata Morales Is Having Her First Solo Museum Show at Dallas Contemporary This Fall