A Manifesto for Women Who Won't Take it Anymore 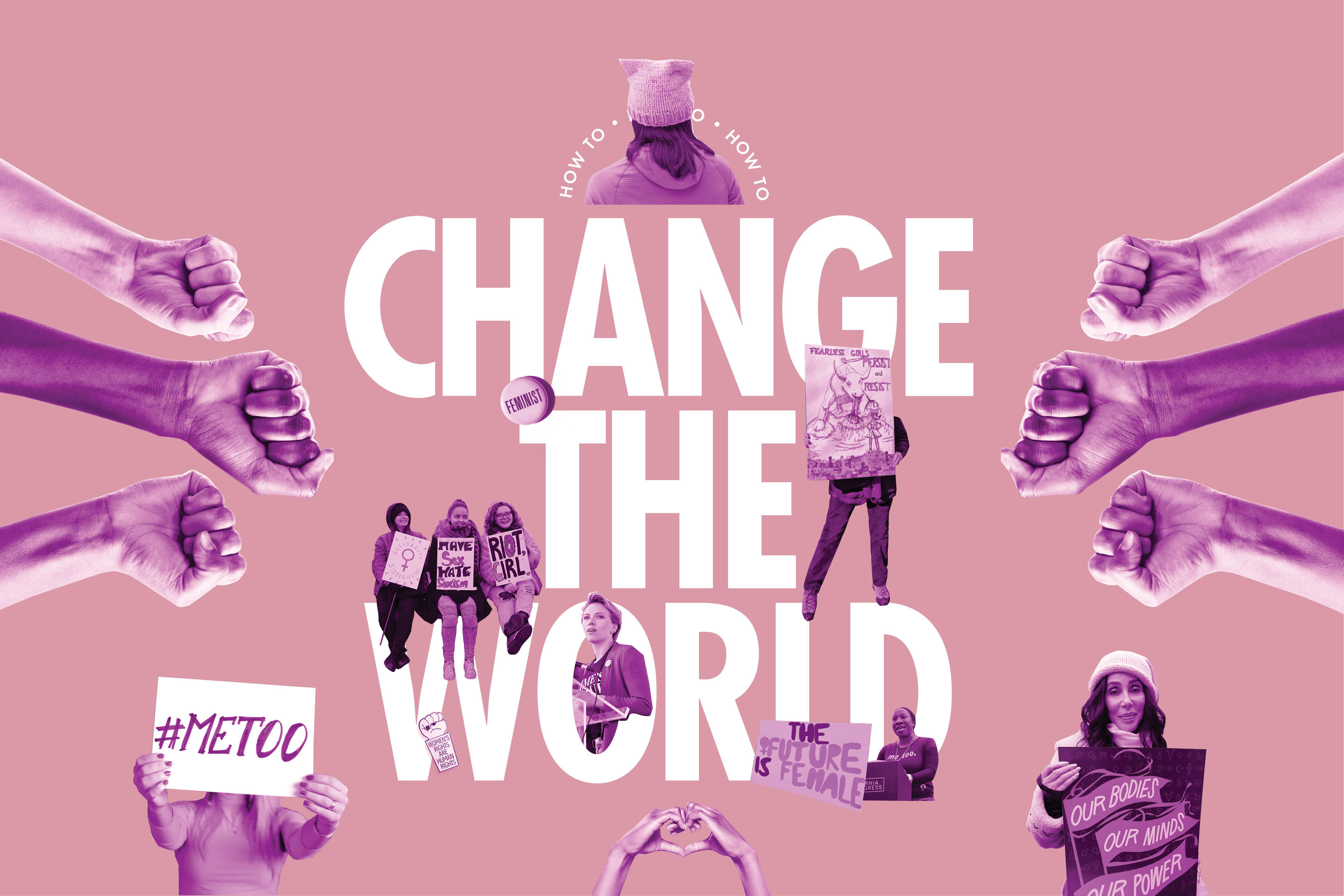 It’s official: 2017 was the year men learned that they can’t mess with women. Feminists began by galvanizing seismic protests in cities across the world against one of the most openly sexist leaders in modern American history, and they ended it with a digital movement that toppled many famous male figureheads in entertainment, media and government globally. Almost 13 million of us contributed to the #MeToo movement to pivot the conversation about sexual harassment and become the first generation to witness unprecedented accountability for men who have abused women. The next test for the feminist movement is keeping that fire alive—and that applies to you, whether you’ve just thrown your pussy hat in the ring or you’ve got 20 years’ worth of protest signs in your basement. It’s time, as political pioneer Shirley Chisholm succinctly put it, to “organize the rage.” Here’s how we do it.

Audre Lorde said it best when she proclaimed “Revolution is not a one-time event.” Although there’s always more work to be done, one of the biggest threats to activism is burnout. I don’t know about you, but I’ve been stocking up on eye cream like it’s bottled water during a hur­ricane. I approach my morning news feed like it’s some sort of bomb, fearing it will deliver yet another reason for me to rip my hair out and move to a secluded island with no cell service. Social feeds that used to be filled with poke bowls and avocado toast can feel like a daily assault. Given the ways that technology can overwhelm us, it’s essential to remember that the fight for gender equality is not a race. It’s a marathon.

Although every social-justice cause is connected, it’s impossible to be an expert in all of them. Pick the cause (or two) you care most about and focus your energy there. On other issues, be an ally and amplify the voices of those at the forefront.

Paola Mendoza, former co-artistic director of the American Women’s March, told us that one of the biggest mistakes she sees would-be activists make is allowing rage to be the focus of their work. “Anger is an emotion that depletes you,” she explains. “It might fuel you at first, but over time it takes away your energy. It clouds your vision. It weighs you down. But if we are organizing out of a place of love, then we will never become depleted because love is infinite. Every activist must identify what it is they love and allow that to be the reason they fight every day.” Of course, this doesn’t mean ignoring or repressing rage. “Trust me, I’m angry right now,” says Mendoza. “But I know I can be in this fight for the long haul because it is love that is guiding me.” As activists, we are primed to see what’s missing, not what we have. To keep yourself grounded in positivity, use a mental gratitude journal: Every night, list three things that you’re grateful for. (Mine usually include chocolate or family.) Appreciating your gifts makes you better able to use them in the service of others.

One of the realms in which women have more power than they think is consumer spending. According to estimates, we control roughly 90 percent of it, and one of the easiest ways to do your part when it comes to gender equality is to buy stuff, listen to stuff, read stuff and watch stuff that is made by women. Lindsey Taylor Wood, CEO and founder of The Helm, a venture-capital fund that only invests in female entrepreneurs, believes that this is the key to global gender equality. “Men invest their money, and women give it away,” she tells me. Taylor Wood’s advice to women is not to start a charity or non-profit but, rather, launch a business or invest in another female-owned business. Her favourite Gloria Steinem quote: “We’ll never solve the feminization of power until we solve the masculinity of wealth.” Want some first steps? Order some treats from Collettey’s Cookies, a business started by a young woman with Down’s syndrome who aims to create employment opportunities for women with disabilities. Get some designer prints from Tammy Beauvais Designs, a native-owned and socially conscious company based outside Montreal. Go see a movie directed by a woman instead of a comedy with the same five white guys.

5. Allow yourself to get it wrong

Although we all put our own missteps under the microscope, most of the people around us will notice only a fraction of them—and everyone else is on their phones anyway. But even “professional” activists like Alaa Murabit forget this. Murabit, 28, is a Saskatchewan-born activist who founded Voice of Libyan Women and is now a UN High-Level Commissioner. “I lose confidence all the time,” she admits. “I used to go back and try to do a play-by-play and self-critique, and for me that didn’t work because I tended to be extra-harsh.” Murabit says she now uses relaxation and prayer to get through her imposter-syndrome moments. “I completely forget about it, relax and reassess later when I am more likely to be kinder to myself.”

I strongly believe that the next phase of the feminist movement should focus on men—not as a way to detract from the concerns of women but as a way to properly address them. All genders stand to gain from gender equality, yet not all are expected to be active participants in it. We equate gender equality with women, omitting the fact that men have a gender too. We don’t pay attention to the way they are socialized as much as we have scrutinized the messages we send to women and girls. It’s time to challenge men to call out their own culture and behaviour for the benefit of all people. I like to engage with men using what I call the question method: leading them to their own answers with a set of questions that pushes them to explain their sexist beliefs. It’s kind of like a feminist Jedi mind trick. For example: Man: “Why are you even a feminist?” Woman: “Why don’t you consider yourself a feminist?” Put the onus on haters to explain their perspective, not on yourself to defend it.

Our culture has allowed the concerns and well-being of middle-class, white, straight, cis and able-bodied women to hijack the spotlight of the feminist movement for far too long. It’s not enough for white women to just follow women of colour; they need to actively support them too—with their money, political donations and activist energy. “Honestly, my best advice is to just listen to women of colour,” says Supriya Dwivedi, a radio host and columnist active in the feminist community in Toronto. “This applies to white women as much as it applies to me when I’m trying to lift up those around me who don’t always get a seat at the table or a platform to air their views.” She continues, “Look around to see if you’re really advocating for all women or merely women who look like you.” If you’re not sure where to start, Dwivedi suggests organizations like Women Win Toronto, a group that raises money for diverse female candidates to run and win elections, or Canadian-Muslim Vote, an organization that engages governments on issues that affect Muslim communities.

8. Dismantle the patriarchy and chill

It sounds counterintuitive, but if we don’t step back from the news cycle or social media, crazy stuff will start seeming normal. The phenomenon is called the “Overton window”: When we’re exposed to so many extremist views, our tolerance for them actually increases. (It’s also what happened to me after a Bumble-date binge, where I thought I should settle for bad-body-odour Bob because consecutive lame dates had shifted my standards.) I used to be the poster child for phone addiction until I discovered airplane mode wasn’t just useful at 40,000 feet—I started to use it at night so that I can choose when I want to plug in and view my notifications. My rule is simple: clouds before the cloud. That is, look out your window before you start staring at a screen. Meditation apps are a great way to use technology to manage our technology. I can’t live without Headspace. It has a bunch of different guided meditations for walking, commuting, running and even eating. The one that helps you fall back asleep if you’ve woken up in the middle of the night is my favour­ite, but for me the entire app has become more indispensable than Instagram, which says a lot.

9. Believe in your gut and yourself

If there’s one thing that has been made crystal clear by the #MeToo movement, it’s that anytime you have a weird feeling about a situation or a person, you are most likely right. There will be enough people who doubt you throughout your life—don’t add yourself to that list. Let your gut guide you to greatness. Imagine if Thérèse Casgrain hadn’t persisted with the “controversial” idea that women are people and deserve the right to vote, or if Nina Wilson, Sheelah McLean, Sylvia McAdam and Jessica Gordon hadn’t fought against “common-sense” federal policies degrading native land and founded Idle No More. Women trusting their sense that something isn’t right has helped reshape our world. Don’t let your story be one that almost was.