Get a peek at some behind-the-scenes action at the summer games, courtesy of some of Team Canada’s amazing athletes. 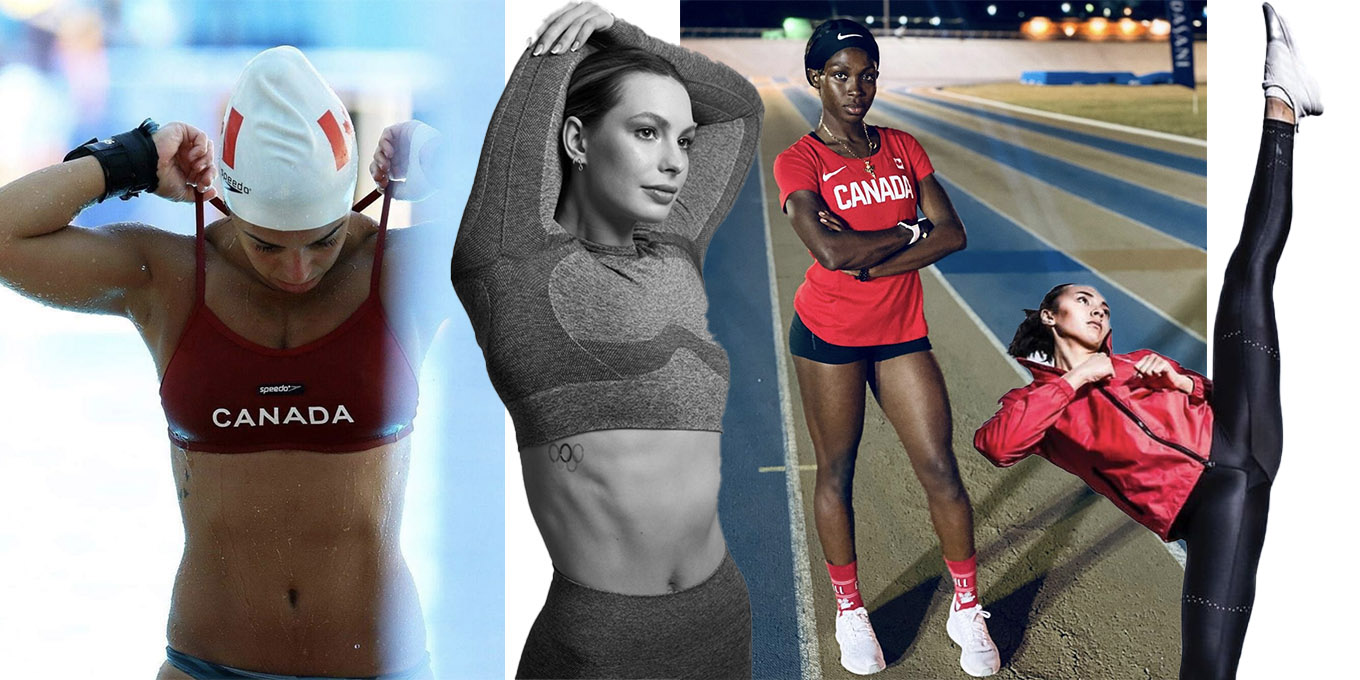 Christine Sinclair is the greatest Canadian soccer player of all time. She made her debut on the national team at 16 years old, and has since scored a whopping 186 international goals – the most of any player (including Cristiano Ronaldo), regardless of gender. She was also part of the bronze-medal winning Olympic teams in 2012 and 2016. Tokyo marks her fourth Olympic Games.

If you’re talking about Canadian basketball without talking about Kia Nurse, you’re doing it wrong. She was the youngest member of the national team at the 2014 world championships, where Canada placed fifth – their best result since 1986. She’s since gone on to be part of the gold-medal-winning team at the 2015 Pan Am Games, and was the country’s flag bearer at the closing ceremony in Rio after a very impressive performance.

Penny Oleksiak wowed fans at her record-setting Olympic debut in 2016, when, at 16 years old, she became the first Canadian athlete to win four medals – a gold (Canada’s first in swimming since 1992), a silver and two bronze – at the same summer games. The feat also tied her with Victor Davis as the nation’s most decorated Olympic swimmer ever. And, if that wasn’t enough, she earned the distinction of being Canada’s youngest gold medallist ever. She sure is an incredible athlete to watch.

Playing soccer since the age of eight, Kadeisha Buchanan has been dubbed the “Christine Sinclair of defence” by a former Team Canada coach. Sinclair is a Canadian sports legend, and Buchanan is well on her way, having been named the Canadian female player of the year three times and acting as an instrumental part of the team that won bronze in Rio.

Alannah Yip tried her hand at climbing for the first time when she was just six years old. The 27-year-old Vancouverite has come a long way since, becoming the first Canadian woman to advance to a World Cup climbing final in 2017, and winning the combined event at last year’s Pan American Championships in Los Angeles to secure her spot at the Olympics for the first time in Tokyo.

Runner Melissa Bishop-Nriagu is no stranger to the Olympics – Tokyo marks her third games. She just missed the podium at Rio 2016, coming in fourth in the 800m race (during which she matched Canada’s best-ever time at the event), and ran her fastest time in nearly four years at a recent competition, so it’s safe to say she’s ready to go.

Another record-breaker, Rosie MacLennan became the first trampolinist to win back-to-back Olympic gold medals when she topped the podium in Rio. The accomplishment also made her the first Canadian to win back-to-back golds at a summer games, and the first Canadian woman to win two golds at an individual event at the summer games. Her gold-medal win in London 2012 was one of Canada’s two total, and the country’s first-ever in the sport.

At London 2012, her second Olympics, Meghan Benfeito won her first bronze medal in the 10m synchro event alongside her former partner Roseline Filion. The pair went on to win bronze again in Rio, where Benfeito also took home a bronze in the individual 10m diving event. She now has her sights set on Tokyo with new partner Caeli McKay – the two previously won gold at the world championships this past May.

Ghislaine Landry scored an impressive 41 points when Team Canada won the bronze medal at rugby sevens’ Olympic debut in 2016. She’s also one of the sport’s most prolific scorers (nbd), and is tied for third all-time in matches played (208 total so far, if you’re wondering).

Crystal Emmanuel is one of Canada’s top sprinters. She was a 200m semi-finalist at both London 2012 (her Olympic debut) and Rio 2016, and broke a 34-year-old Canadian record in the same event, running a speedy 22.50 at a competition in Ireland.

Miranda Ayim has been representing Canada on a national level since 2006, when she was 18 years old. She helped lead the team to gold at the 2015 Pan Am Games, and has been crucial to the team’s successes. This year, she is one of Canada’s flag bearers at the opening ceremony, sharing the honour with rugby player Nirayama.

Those who follow golf know that 23-year-old Brooke Henderson has been making waves in the sport. So far, she’s won 10 titles, cementing her record for most professional wins by any Canadian golfer. This is her second Olympics – she tied for seventh in Rio.

Who doesn’t love a little tennis? Eighteen-year-old Leylah Fernandez is making her Olympics debut this year, after becoming a full-time player in 2020. Earlier this year, she also won her very first Women’s Tennis Association title at the Monterrey Open, where she didn’t lose a set the entire tournament.

A Canadian woman has never won an Olympic medal in the artistic gymnastics events. Ellie Black hopes to change that. The 25-year-old has already made plenty of history: She was one of five athletes to win five medals at 2015’s Pan Am Games, placed fifth in the women’s individual all-around event at Rio (Canada’s best-ever result) and became the country’s first ever all-around medallist at the worlds when she won silver in 2017.

When Jennifer Abel made her Olympics debut at Beijing 2008, she was just 16 years old. Four years later in London, she won bronze with her then-diving partner at the 3m synchro event – Canada’s first medal of the games. Now she’s back for her fourth games, now partnered with Mélissa Citrini-Beaulieu, with whom she won silver at the world cup event earlier this year.

Michelle Li started playing badminton with her mom when she was 11. Now, the 29-year-old is Canada’s most successful woman badminton player ever. She won the doubles gold at the 2011 Pan Am Games (her debut), and her and her partner, Alex Bruce, went on to finish fourth at the 2012 games – Canada’s best-ever Olympic result in the sport. She also became the first Canadian woman to ever win a singles gold at the Commonwealth Games.

Skylar Park has been practising taekwondo at her father’s dojang since she was a two-year-old. Now, 22, she’s already had a great 2021, having won two gold medals at international tournaments, carrying on the momentum she’d been building in 2019, when she landed on the podium at eight of the 11 international events she competed in.

Melissa Humana-Paredes and her teammate, Sarah Pavan, made history in 2019 when they became Canada’s first-ever beach volleyball world champions. Now, the duo is ranked second worldwide and is vying to score Canada’s first Olympic medal in the sport since it was introduced at the summer games in 1996.

Read more:
The Evolution of Team Canada’s Summer Olympic Uniforms
Think Outside the Gym: How to Get Physical This Spring
Disco-Loving Roller Skaters Have Revived the Breezy Sport