Stay informed and keep your timeline woke by following 10 of our favourite feminists who make it their duty to comment and respond to social injustices daily. 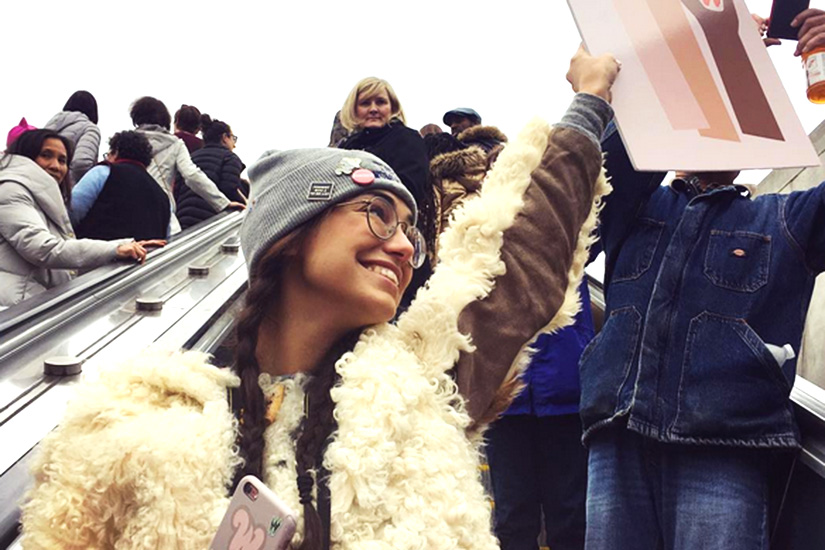 24-year-old Rupi Kaur was thrust into public attention in 2015, when she uploaded a photo onto Instagram of herself in bed, a period stain visible on her clothing and sheets. The social media platform removed the photo, claiming that it violated their community guidelines. Kaur fought back, reposting the photo with a statement that highlighted the hypocrisy of this action.

“I will not apologize for not feeding the ego and pride of misogynist society that will have my body in an underwear but not be okay with a small leak” she wrote, “Your pages are filled with countless photos/accounts where women (so many who are underage) are objectified. pornified. and treated less than human.” The Toronto native continues to use the platform, posting poetry and illustrations that deal with intense topics such as abuse, femininity, love and trauma. In 2014, Kaur released her debut novel Milk and Honey.

Fariha Róisín uses her social media platforms to speak out about feminism and patriarchal constraints, specifically imposed on Muslim women. In the wake of Trump’s Muslim ban and extreme islamophobia present in modern day politics, her message is paramount. “I used to be ashamed, deeply ashamed of being Muslim,” she captioned this Instagram photo. “I am unlearning that… This is a time where I encourage all of us to try and understand context, and understand the beauty of Islam. I hope that we can decolonize together.“

Many of us feel scared today, and that&#39;s valid. We are afraid for the future of a nation that&#39;s democratic process is deeply flawed. I as a Muslim am terrified of how far you can get when you hate us, that leaders around the world from Trump to Narendra Modi (the PM of India) have careers built on the hatred of Muslims. Yet, I am also reminded of the strength of my community (my chosen family of bold people) who have fought until the end for a better life. I think of my parents that immigrated to two western countries only to experience being shamed for their skin, the way that they talked… or the aggressions they experienced from so many different types of people because of their faith. So, today I raise my head again. For many of us, this day is no different to the fight we&#39;ve had our whole lives, it&#39;s just more palpable now, but we rise and we fight again. I feel proud to be a Muslim woman, and I am powerful.

Canadian journalist, feminist and political activist Elizabeth Plank is known for using humour and witty tactics to draw attention to social issues. She now lives in New York City, and was highly involved in covering Donald Trump’s campaign through vox.com. Plank was also named one of Forbes Magazine’s 30 under 30 in Media in 2015. Watch her viral Manspreading video, NYC Subways: Watch What Happens When a Lady ‘Manspreads.’

home is where the justin trudeau is and the bro-nazi cabinet is not.

Model / activist Adwoa Aboah has continued to be vocal about her battles with depression, addiction and attempted suicide. In an effort to communicate more effectively with other women about these issues, Aboah founded Gurl’s Talk, an online space “where girls can openly share their experiences and feelings in a safe and trusting environment.”

And so it begins….Tara LA, hello NYC.

There are numerous reasons why Audrey Gelman should be on your radar–here is one of them. The former public relations consultant recently co-founded The Wing, a co-working space in New York City for “women on their way.” The polished Manhattan loft strives to provide New York City working women with a “throne away from home,” where they can post up on their MacBooks in between meetings, use some Glossier products, or collaborate with other professional gals. Gelman is also famously BFF with Girls creator Lena Dunham, and was the inspiration behind the character Marnie.

&#34;I have not ceased being fearful, but I have ceased to let fear control me.&#34; Erica Jong

Hunger Games star Amandla Stenberg has become widely known for her social activism, famously calling out Kylie Jenner for cultural appropriation on Instagram in 2015. “Appropriation occurs when a style leads to racist generalizations or stereotypes where it originated but is deemed as high-fashion, cool or funny when the privileged take it for themselves,” she said in the video Don’t Cash Crop My Cornrows which she uploaded onto her Tumblr. Since then, Stenberg has continued to use social media as a platform to speak out against social injustices and is active in feminist organization @arthoecollective, while being a youth ambassador for charity organization No Kid Hungry.

so soft today, so full of love

Toronto native Petra Collins is a 24-year-old photographer who frequently works with major publications such as ELLE, I-D, and Vogue. She is also known for speaking out about gender inequality and hypocrisy. In 2014 she penned an essay, “Why Instagram Censored My Body” for The Huffington Post, when Instagram removed a photo of her unwaxed in a bikini. In 2015 she made her literary debut with the book “Babe,” an collection of photographs taken by female artists around the world. The book, along with Petra’s work have been essential in contributing towards the female gaze movement in photography, where the woman’s perspective is given the opportunity to be showcased and considered, rather than the man’s.

rg @carlottiica ✨ so touched and inspired by everyone on the streets today ?today is just a warm up?

Social media queen Tavi Gevinson was catapulted into the spotlight at the age of 12, when her fashion blog Style Rookie caught the attention of many. She would go on to shift the focus of her online commentary to popular culture and feminism, founding the online magazine Rookie Magazine. Read her powerful thematic Editor’s Letters for the feminist outlet here.

Last night I dressed like a Polly Pocket/Betty Spaghetti/dress-up computer game from my childhood!!! [email protected]&#39;s faces dress, @shrimps__ faux fur, @prada sandals &amp; @miumiu bag ? if you can dream it you can achieve it!!!

Carmen Perez is a criminal justice reform activist, executive drirector of The Gathering For Justice, and one of the lead organizers of The Women’s March on Washington. In 2014, she delivered her first TEDx Talk inside of a prison, focusing on the importance of second chances, overcoming adversity and rehabilitation. She continues to fight for equality and social change in the current political climate.

There will be a time when women will look back and be reminded of the women who took a bold stance when others remained silent. I #MarchWithLinda because when others were silent while my community was be being attacked, she spoke up on our behalf. Linda, my sister in the movement, has dedicated her life fighting injustice and working towards human and civil rights. I will always stand with Linda because she sees her liberation bound in mine as I see my liberation bound in hers. Please take a moment to share, we need all of you to stand with us! &#34;In the end, we will remember not the words of our enemies but the silence of our friends.&#34; ~Dr. Martin Luther King Jr. #IMarchWithLinda #Sisterhood #WomensMarch cc: @lsarsour photo by @alexqarbuckle

Women if the soul of the nation is to be saved, you must become its soul.

Yes… she’s on Instagram! The OG feminist activist has been fighting for gender equality since the 1960’s and 70’s. In 2005, Steinem founded the Women’s Media Center with Jane Fonda and Robin Morgan. She continues to advocate for women’s rights.