Are pop-up stores the hip new face of retail or a clever marketing ploy to fight consumer fatigue? 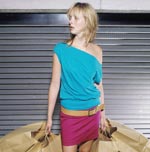 It’s three o’clock on a Tuesday afternoon. You’re sitting in front of your computer at work, and suddenly an e-mail appears in your in-box inviting you to an exclusive fashion sale on Thursday. The downtown address is an unmarked warehouse. The password is “gingham.”

It sounds a bit James Bond, but the scenario is very real. And who’s the mastermind behind these guerrilla tactics? Russ Miller, the creator of Vacant, a high-end travelling store that sells one-of-a-kind shirts, shoes and accessories. “Normal retail is just about making money, but coming to Vacant is an experience,” says Miller, who jumped into retail when he realized that shopping, like a good martini, needed stirring up. “We never put prices up on our website, and we don’t list all our items. People fly to our stores just to get the products.”

Miller used to work in corporate advertising in London and New York but made the break when he launched his first Vacant store in New York in February 2003. He rented an empty space in trendy SoHo to sell limited edition designer gear to an exclusive crowd. Kevin Bacon, Kyra Sedgwick and Robin Williams popped in to shop, as well as a slew of brand-conscious trend-setters. It seems that Miller had tapped into a retail model that gave people exactly what they hankered after– exclusivity, novelty and hip happenings.

The concept is simple enough: Vacant takes over an empty space for a month and sends private invites by e-mail to a small portion of its 1.6 million members from its www.govacant.com database. The company’s appeal is its exclusivity: it showcases one-off and limited edition products from hot brands and emerging designers. There are belt buckles made for Busta Rhymes by Kel 1st, hemp sneakers by Puma and Billionaire’s Boys Club apparel designed by N.E.R.D singer/Neptunes producer Pharrell Williams and A Bathing Ape designer Nigo. “We want people to feel like they’ve found something unique and special,” says Miller. As an added attraction, Vacant stages art installations and creative happenings at each store. (For example, Puma built a mini-racetrack for one shopping spree in Las Vegas.)

Photography by Jonathan Storey/Getty Images
Pretty soon, temporary Vacant stores were opening up in major cities, such as Chicago, London, Tokyo, Shanghai, Paris, Berlin, Stockholm and Las Vegas. But with competitors stepping up to the plate, Miller didn’t rest on his laurels. This October, Vacant launched a different experience: three Hummers are now travelling through Europe and North America selling sneakers, designer toys, shirts and jackets. “We’re in talks to visit four major Canadian cities by the end of the year,” says Miller.

Proof of Vacant’s effectiveness lies in the copycatting it has spawned. Retailers have run with the concept, opening day, week and month-long sales in alleyways and lofts and on barges. Merchants from JCPenney to Delta Air Lines’ Song are experimenting with pop-up retail. Comme des Garçons was quick off the mark, opening one-year guerrilla stores in Berlin, Barcelona and Singapore. Others are slated to open in Stockholm, Warsaw and Helsinki. In August of this year, Comme’s designer Rei Kawakubo launched the label’s second collaborative guerrilla store in Tokyo: Colette Meets Comme des Garçons. On the first day, some 70 fashionistas were waiting in line to buy the exclusive merchandise, and the retail space/art gallery is expected to generate US$1.1 million in sales before it closes at the end of December.

Now, even publishers have jumped on the bandwagon: this fall, hopping magazines Lucky and Shop Etc., along with Self magazine, launched various mini-guerrilla ventures. Self opened a temporary spa– the Self Center– for a month in a New York City brownstone, while Shop Etc. will have temporary stores to coincide with New York and L.A. fashion weeks early next year.

So why are retailers so hot on this concept? Temporary stores are the perfect opportunity to test the waters in new locations. Designer Kate Austin is co-owner of Ruckus, which specializes in bold, hand-painted textile creations (clothing, fashion accessories and home decor). Last year, after opening a store and studio in Toronto’s Distillery District in the east end, Austin and co-owner Kristin Ledgett set up a temporary summer shop on the city’s artsy Queen Street West strip. “We thought if we had something in the west end, we would have a whole different crowd,” says Austin. “We just wanted to try it out. We didn’t want to commit.”

Photography by Jonathan Storey/Getty Images
Leasing permanent retail space can be prohibitively expensive: in central Toronto, the average price is $30 a square foot per year. (The average Toronto store is approximately 2,000 square feet.) In comparison, the asking rent for a ground-floor space h in a primary retail corridor in New York is US$284 a square foot. Temporary stores require far less infrastructure investment. “I’m not sure that investing a ton of money into glamming up your retail store necessarily translates into a return on your investments,” says Ledgett. “We were pleasantly surprised by the amount of business our Queen West temporary store generated.”

Len Kubas, a Toronto-based retail consultant, says temporary stores are aided by fallow periods in the market. “When economic times are bad, you get a lot of vacant retail store space and things pop up.” Tradition-ally, these have been remainder book shops and clearance houses. But with guerrilla stores translating to big sales and higher street cred, a whole range of retailers may get more courageous about where and when they appear.

Marina Strauss, the retailing reporter with The Globe and Mail, agrees that high vacancy is a catalyst for experimentation. “Sometimes major retailers experiment with their own space, and if it works out they make it a long-term permanent concept. If it doesn’t, you’ll never see it again. It’s tougher in Canada because we don’t have as big a population, but if it works in the States you’ll probably see it more in Canada.”

For American retailer Target, king of the quick sale, the guerrilla model is all about creating fast business in areas where they don’t have a presence. While in suburbia Target is as common as 7-Eleven, in Manhattan it’s a cool novelty. So Target has sold its sleek but cheap homeware, appliances and clothes off a temporary barge on the Hudson River, in the middle of the Rockefeller Center and out of roving trucks in Manhattan.

Retail experts believe that Canada may be the perfect guerrilla retail environment. Our cities aren’t so crowded that a trip to IKEA is alarmingly far, but we’re a country small enough to be given short shrift where high-end designer outposts are concerned. (How many shopping bags read “Paris New York Halifax”?) Imagine, then, if a bus arrived in downtown Ottawa in late summer with fall’s latest Marc Jacobs collection. Or if your favourite designer blew into Calgary for a sample sale, setting up shop in a suite at the Hyatt Regency for the day. Across the Atlantic, the London Fashion Bus– a refurbished double-decker– travels the U.K., offering more than 1,400 pieces by 40 independent British designers, bringing young designers and fashionistas in small towns together. It’s only a matter of time before that happens here.

So will a Holt Renfrew train pull into Saskatoon any time soon? “We’re putting our heads together,” says Holt Renfrew’s fashion director, Barbara Atkin. “But right now, we’re just going to wait and see. What’s becoming more important today is how you sell a product, how you break through all the clutter in a landscape filled with so much of the same stuff. People are tired of things that they can get everywhere and easily, so guerrilla retailing becomes an answer to that.”

Innovative pop-up stores like Vacant create a buzz, and Target was quick to pull the concept into its marketing arsenal. But if the rumour that Target plans to buy some or all of Hudson’s Bay Company pans out, Strauss predicts that retail efforts in Canada will get even more creative. “Everyone is looking for something new and different. If Target comes here, it’ll be tougher for other retailers but great for the consumer. It’ll bring a whole lot of fresh ideas.”