From chick-flicks to vigilante justice, ELLE scopes out the best films this month! 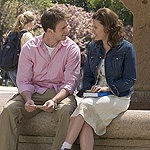 With the success of last year’s The Devil Wears Prada, it stands to reason that a slew of big-screen chick-lit flicks would soon follow. Adapted from Emma McLaughlin’s best-selling novel, Scarlett Johansson plays recent college grad Annie Braddock, who takes a job as a nanny only to realize the perils of domestic servitude. Lovely as she is, the Louis Vuitton Fall ad campaign she’s currently splashed across makes it hard to believe ScarJo is some regular New Jersey schlub. Although it might not pack the punch of Prada, framing the story through an anthropological field diary gives the film a bite not found in the original novel. With a sprawling Manhattan setting, sharply defined characters, and a hot male lead (the yummy Chris Evans) The Nanny Diaries proves satisfying fodder for the Ugly Betty generation.

For those who lamented Clive Owen’s James Bond snub, Shoot ‘Em Up provides insight into why that partnership would never have worked. Owen radiates danger — a raw animalism that thrums under a veneer of indefatigable cool. As Mr. Smith, the rebel badass with a shadowy past and a hair trigger sense of justice, a grizzled, wisecracking Owen is far too coarse a character to depict a clean-shaven, martini-tipping Bond, and it’s a role he was born to play. When Smith becomes the unlikely guardian of a baby, he enlists the help of a hot hooker with a heart of gold (Monica Bellucci) and becomes an army of one, waxing poetic on his dislikes — from men’s ponytails to driving etiquette and disciplining children — and we’re the better for it. The always-excellent Paul Giamatti, who has made a fine career of portraying nebbish losers, (American Splendor, Sideways) returns to his villainous roots, this time, as a rage-addled crime boss. (A delicious performance for those who recall Giamatti’s stunning turn as Howard Stern’s apoplectic boss in Private Parts.) Highly stylized, ultra violent and chock full of zingy one-liners, director Mike Davis’ ballet of cartoon gunfire is reminiscent of early Tarantino, offering an antidote to Bond: A leaner, meaner, decidedly sexier anti-hero for the modern age.

They say revenge is a dish best served cold but in The Brave One, this is revenge exacted with a feminine hand. Jodie Foster stars as talk radio host Erica Bain, whose life is cruelly turned upside down when she’s brutally attacked by a gang of thugs and left to watch them beat her fiancée (Andrews) to death. After drowning in judicial red tape, Foster is compelled to hunt down her attackers, meting out her own brand of vigilante justice. Consider Foster’s rich history of victimization: The Accused, Panic Room, Flightplan. All begin with Foster as the hapless innocent; confused and afraid. But we know this sad state of affairs won’t last long. And no matter how many variations of the role we see her inhabit, there’s something empowering about watching Foster dig deep to slowly discover her inner warrior woman. Muggers, wife-beaters, street hoods — none are safe from Foster’s gun-toting, executioner-style justice. Yet, this isn’t the cold, calculated bravado of a Charles Bronson in Death Wish. Foster’s brand of revenge is delivered with pain, awareness, and shame. Directed by Neil Jordan (The Crying Game), Foster takes on the territory of the urban suspense tale, turning in a haunting yet thrilling, Oscar-worthy performance that is as fragile as it is fearless.

Forget the runway! We roam Canada to check out your trendsetting street style!