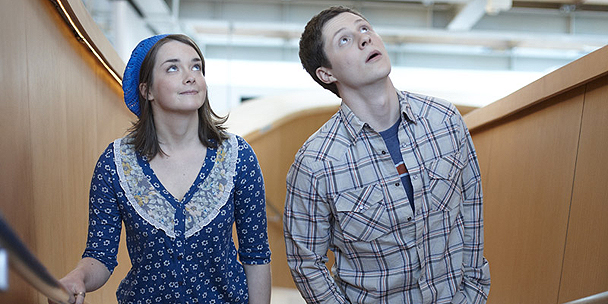 Ask Noah Reid and Allie MacDonald about the unique concept of their new film, Score: A Hockey Musical, and the fresh-faced newcomers brighten. “It seems improbable, but hockey and music are two things that Canadians do really well,” says Reid. MacDonald adds that after she read the script, she wondered, “Oh, a hockey musical. Why hasn’t anyone done this before?” The novelty paid off, and Score was recently chosen to open the Toronto International Film Festival.

The movie centres on the twin sides of 17-year-old Farley, a sensitive bookworm at home and a Crosby-esque wunderkind on the ice. Much to the dismay of his bohemian parents, played by Olivia Newton-John and Marc Jordan, Farley is recruited into the junior leagues. But entering the downand- dirty world of amateur hockey isn’t an easy transition for the Gandhi-quoting teen, who is torn between his pacifism and the crowd’s love of a good brawl. Complicating matters further, his new life strains his friendship with best pal Eve (MacDonald).

For Reid, who makes his film debut in Score, the character of Farley seemed custom-made. “When you read a script, you always think ‘Is this me?’ But then I read this script and thought ‘Oh, my God, I am this guy.’” Being that guy required acting, singing and skating chops, but none was a problem for Reid: The young Toronto native is already an accomplished stage actor and musician, and he grew up playing hockey. MacDonald, who has been performing in musical theatre since she was a teen in Cape Breton, found something familiar in her role as well. Two years ago, she left both the East Coast and theatre behind to start a new life in Toronto. The nature of her big break remains a source of amusement. “I decided I wanted to move to Toronto and become a film actor,” she says. “So I did that, and my first project is a musical!”

Hockey is Score’s big draw, but MacDonald believes that it offers much more to audiences, including an exploration of love and friendship. “It’s really a story about two kids who are reaching a very important age. They’re learning how to deal with obstacles and with each other.” Reid agrees. “It’s less about hockey than figuring out what you think is important in life. The movie is about hanging on to who you are.”