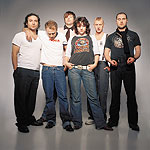 Metric is just one Canadian indie group that is generating buzz these days. Other bands making their mark include Vancouver’s The New Pornographers, Toronto’s Broken Social Scene and The Hidden Cameras and Montreal’s Arcade Fire. These multi-talented groups all share a community-minded spirit as well as a flexible membership. Here are a few of their talented musical offspring.

• Destroyer Dan Bejar is a part-time member of The New Pornographers, but his own band, Destroyer, best showcases his eccentric pop songs and love-hate relationship with the music industry. Destroyer’s Rubies (Merge Records), his seventh album, contains some of his most affecting and easygoing work ever.

• Final Fantasy Owen Pallett has played violin on the crowded stages of both Arcade Fire and The Hidden Cameras; his solo project, Final Fantasy, focuses on his voice and violin playing, with liberal use of effects pedals.

• Republic of Safety This politically charged, high-energy dance-punk ensemble is fronted by The Hidden Cameras’ Maggie MacDonald, who leads her ecstatic followers in a determined quest for social consciousness and musical freedom.

• Stars In 2004, this Montreal-based band, which contains Broken Social Scene members Amy Millan and Evan Cranley, released Set Yourself On Fire (Arts & Crafts), one of the most blissful-sounding and lyrically intriguing pop albums in recent memory.

(Need some tunes to inspire your own indie sound? Discover music that taps your creativity!)