Romantic chemistry is in your blood

Astrology aside, your blood type works as the new matchmaker. 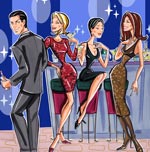 Contemplating an affair of the heart? It’s only natural to start with the blood. In Japan and Korea, blood type is a key to romance. If it sounds horribly practical — intended, perhaps, to see whether your new beloved could give you a transfusion after a car wreck — that’s not the deal. When some hot Korean guy asks “What’s your blood type?” he’s not from the Red Cross — he’s basically asking “What’s your sign?”

“It’s very common,”says Korean-born Vancouver resident Yoon-Jeong Yang. “Blood types in Korea are pretty much the same as astrological signs here.”Your personality, many Asians believe, corresponds to your blood type — A, B, AB or O. (Positive and negative categories, while certainly important to your doctor, are not considered to be a factor here.) North Americans will sometimes refer to a hard-driving careerist as a Type A personality, but this is different. In fact, the blood version of a Type A personality is thought likely to be a calm, serene person — at least on the outside. Inside, their A blood is boiling with anxiety and perfectionism. Introverted and shy, As tend to be loyal, trustworthy and conscientious. They make good team players, but are prone to pessimism.

Type O people are easygoing, popular, creative and confident. They are natural leaders, extroverted and strong. Vanity, jealousy and excessive competitiveness are potential O drawbacks. Type Bs are individuals who go their own way, strong personalities determined to make their mark. They are charming and funny, but prone to selfishness and self-centred behaviour. ABs, naturally, are the most variable of the bunch, veering toward A or B tendencies. Often artistic, over-represented among the famous and influential, they can be moody and unpredictable.

Combinations are the key. Call it blood chemistry. Which blood types mingle into a pleasing cocktail? Whose should you choose to make your own personal Bloody Mary? “We were just discussing that!”exclaims Japanese-Canadian Ikuyo Sugiyama, sitting at a Starbucks table with her Japanese friend Yuki Sekine. “I am type A. I think type O is best for me. They are more romantic, not so concerned with details.”Sekine is type O. “I used to think type A was best for me,”she says. “Now I think O is best.”Why the switch? “Because,”she says shyly, “my boyfriend is O.” Well, it figures — flexibility is said to be an O trait.

More on the next page!Like the signs of the zodiac, the official category profiles are exceedingly polite. If you want to hear about less-pleasant interpretations, you must talk to Japanese or Koreans personally. “Type Bs are the worst,”says Korean ex-pat Jin-Hee Kim. “They’re selfish — the worst guys to hook up with. They’re crazy!” And they come in for a lot of criticism. For this they can blame Hollywood, or at least the Korean equivalent — a recent Korean hit film is called, roughly, My Boyfriend Is Type B. Written and directed by Choi Seok-Won, it is a tale of one girl’s heartbreak and exasperation at her type B boyfriend’s antics. The movie ends happily as the shy, introspective type A girl lays down the law to her egocentric B boyfriend. Eventually, love proves thicker than blood.

Still, the stereotype remains strong in Korea and Japan. B men are familiar by many names: playas, playboys, rakes, roués. They are the rock stars, the James Bond types — exciting, sexy and ultimately unreliable. But it’s a bum rap, according to So-Young Lee, Korean handbag designer and proud B. “Bs are fun and full of energy,”she insists. “They are special people, very adventurous.”

Lee says that blood type is a serious preoccupation in Korea. “There are TV shows, books and magazine articles,”she says, “all discussing blood types. “So pervasive is this craze that it’s possible to buy condoms for each specific type. The condoms themselves are identical. However, each variety comes packaged with different advice about how the guy should approach the pending sexual encounter.

The Asian blood-typing craze apparently began in the early 20th century after some Western scientists noted that type O blood is more common in the West, while B blood is more common in Asia. Since B is also the blood type more commonly found in the animal kingdom, it was argued that Asians must be a lower form of life. In 1930, a Japanese researcher named Furukawa Takeji set out to disprove the theory. Yet, ironically, his work sparked a public interest in the study of blood types and personality that continues to this day.

Time to test the theory. I am AB. What does it mean? “ABs are extreme,” says Saki Nagaura, a northern Japanese girl who works at Tojo’s, Vancouver’s most famous sushi restaurant. “They can go either way. An AB person can be either a genius or an idiot.”

That’s me, all right. It just depends on the day.