What happens when the man you're loving is living a dangerous double life? 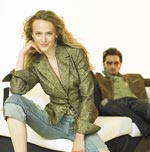 The correspondence began innocently enough. 45-year-old Cathy Taylor was settling in for another quiet evening at home on the outskirts of Seattle. She’d recently separated from her husband, and, that night especially, she was feeling anxious to connect with new people. “I couldn’t sleep,” she remembers. As the evening wore on, she steeled her nerves, booted up her computer and logged on to a chat room under the guise of Sleepless777.

It wasn’t long before a cordial instant message popped up onto her screen. “Good evening, luv,” Tinwhistle wrote, proceeding to dispense a series of brash and witty one-liners. The man behind the moniker identified himself as Patrick Burke, an Irish millionaire originally from Belfast, now living in Winnipeg. He’d made his fortune in the event-planning business, he said, organizing such high-profile events as the Pan Am Games and the Canadian Figure Skating Championships.

Burke seemed lonely. Taylor recalls more than one year later, as she sits nursing a cocktail in the smoky lounge of Seattle’s Kit Carson restaurant. He said he was going through a nasty divorce. To top it off, it was his birthday and he was all alone. “I thought it was sort of sad,” she says.

Soon, Burke was sending Taylor digital images of himself and his daughter, as well as a shot of his palatial home in Winnipeg. He told her he was anxious to relocate to Seattle, where he hoped to become the city’s next impresario. More than two months and some 100 e-mails later, they agreed to meet in person at a local family restaurant — the very one Taylor sits in now.

“The first thing that went through my mind when I saw him was, ‘You fibber,’” Taylor says, shaking her head and laughing. He wasn’t quite as tall and slim — nor nearly so dashing — as the man in the picture had been. “The only reason I knew it was him was that he looked right at me and said, ‘Hello Catherine.’”

Despite his portly appearance — five feet eight inches and tipping the scale at 350 pounds — Taylor was charmed. Burke spoke in a thick Irish brogue, and was full of stories of his impoverished youth in Ireland. His mother had died when he was nine years old and he’d been raised by his abusive, alcoholic father. At the age of 12, he left home and lived for some time in a Belfast pub. Eventually, he had won a scholarship to the prestigious Trinity College, where he met a small cadre of political radicals who recruited him into the IRA. He was trained as a spy.

“I was fascinated by his intelligence, his background and his humour,” Taylor says. “I was totally at ease with him. He was just like a big teddy bear. We chatted for hours that night.”

Photo courtesy of Le ChâteauShe remembers stroking Burke’s hand across the table as he wept quietly, describing the tragic death of his first wife, Kathleen, a Catholic who had been blown up in an IRA bombing just steps from their apartment. Devastated and desperately seeking to forget his loss, Burke fled to North America.

That first meeting at the Kit Carson gave way to an intense, eight-month relationship. They determined to go into business together and, although theirs never amounted into a full-blown love affair, Burke clearly wanted romance, Taylor says. At times, she believed she was falling in love with the charming millionaire.

They spent two weeks together of each month, traveling up and down the west coast scouting theatres, stadiums and concert halls for use as potential business venues. They took cottage vacations together, combining business and pleasure.

“He loved to have the best of everything,” Taylor says. “He wanted to stay in the best places. Wherever we traveled, it has to be the top of the line, five-stars.”

“I teased him about being part of the Mafia because he was always in black,” she says. “But he was nothing like that. He was just a kind, soft-spoken Irishman who gave every Bubba on the street money, and he was very generous.” That’s why, at least in part, the truth about him came as such a shock.

One day, when Burke failed to show up for their meeting, Taylor began to worry. His cellphone had been disconnected. Fearing the worst, she logged onto the Internet for Winnipeg news.

Nothing could have prepared her for what came next. There, on the front page ofThe Winnipeg Sun was a picture of Burke, or rather, a 48-year-old Manitoban named Klaus Burlakow, with the headline: “Bureaucrat’s holdup stuns city hall: Retiree faces nine counts of armed robbery.” The man Taylor knew as Patrick Burke had been arrested three days earlier, following a high-speed police chase, and charged with robbing nearly $50,000 from Canadian banks.

“I just started to shake,” Taylor says. “I went into total shock.” Burlakow wasn’t a self-made business tycoon, but a former City of Winnipeg bureaucrat who was apparently happily married, with two children.

It took a few weeks, but eventually, Burlakow managed to phone Taylor from the Winnipeg Remand Centre — where he spent several months before sentencing — to explain his side of the story. He claimed he was trying to escape his dead-end upbringing. He said he’d gotten mixed up with some shady characters whom he owed money and that he was robbing banks to pay them off. At the time, Taylor was still too awestruck to challenge him on the accent or the details of his story.

“How could I have been so bamboozled?” she says. “I think he just wanted another life, to be someone else. I was playing a part in his life he wanted. I was his Meg Ryan in Seattle.”