When to work on your relationship and when to say adios and walk away. 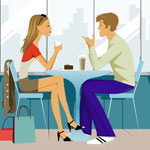 If it is a deal breaker, you will notice that most conversations with The Invisible Man do not lead to anything new. In fact, you may find yourself repeating the same words and phrases that you have used so many times before! Yet there are no new connections, no new insights, no new plans, no new goals, no new ways of being, no new patterns — and never a new direction in the relationship.

Deal breaker scenario: He watches sports (hunts, fishes, exercises, follows the stock market, works on projects, surfs the internet) all day. He refuses to break away from his precious interests in order to spend time together. When the wall is up, it won’t come down. You feel a deeper connection with the phone survey guy than you do with him.

Work on it: You ask him to let go of his obsessive behavior and he begins to work on it. You see signs of movement and evidence of change. Perhaps he designates an area of your lives in which both of you are mutually invested, such as going to the gym together, taking a cooking class, or planning vacations. His willingness to connect gives you hope and something to hold on to — not the wishing, hoping, and praying kind of hope, but something genuine and real.

Walk away: You, and only you, are interested in a deeper emotional engagement. Whenever you ask for more, you feel as if you are banging your head against the wall. In the end, you realize that you are living your life without a companion. With sadness, you realize that when there is nothing shared, it is not really a relationship.

Deal breaker scenario: When you first met, he was sexually attracted to you. You couldn’t even undress without his becoming excited. But now you parade around the bedroom in lingerie, yet he cannot break away from the television (a new flat-screen? Now,
that excites him). And you cuddle next to him in bed, but he refuses to respond. Because he remains detached, you feel like less of a woman.

Work on it: You tell him that you need the reassurance that he is sexually interested, and you back up your request by buying sexy lingerie, planning a romantic getaway, or trying different things. Because you have made an effort, he begins to desire you and initiate sex. The renewed sexuality "warms up" the relationship in other areas.

Walk away: He doesn’t respond, gives no explanation as to why he is sexually disinterested, refuses to talk about it, and remains detached. No matter what you try, his sexual interest is not revived. Where as a
King of Queens rerun used to be more important than sex, a
Teletubbies rerun is now more important than sex.

What’s your deal breaker scenario? Talk about it with other ELLE Canada readers in our forums!

Copyright © 2007 by Dr. Bethany Marshall. Printed by permission. Excerpted from the book
Deal Breakers: When to Work on a Relationship and When to Walk Away by Dr. Bethany Marshall published by Simon Spotlight Entertainment, an imprint of Simon & Schuster, Inc.
Deal breaker scenario: You suspect that he is somebody other than who you thought he was. For instance, he keeps you separated form a group of friends who know everything about him. Or he tells you that he despises bars, but spends an evening at a bar while you are out of town. Or you discover that he has been chatting with an online community about a weird sexual fetish. You wonder,
Who is
this man?

Work on it: When you bring it to his attention, he offers a reasonable explanation and takes ownership of his behavior. He tells you that his friends are big drinkers and he has been embarrassed to introduce you to them. Or that he went to the bar to accommodate a business client. Or that even though he is slightly interested in the fetish, he is more interested in being in a wholesome relationship with you.

When you tell him how you feel, he responds to your concern. He invites you out with his friends or tells you more about the part of his life that he has been hiding. In the end, you discover that his secret is not antithetical to being in a full relationship.

Walk away: When you tell him how you feel, he calls you hypersensitive. He disavows the fact that he has been hiding something from you. The discrepancy between who he presents himself as being and who he really is becomes a chronic problem.

Deal breaker scenario: He refuses to go out with your friends. Although you long for social interaction with the outside world, he does nothing to facilitate it. When you invite him to attend a cocktail party, he sits in the corner and offers little. He is a lump on a log with your extended family, too.

Work on it: Although it may be difficult for him to understand, you explain to him what it is like to fully participate in the life of your family and friends. To your pleasant surprise, he begins to show an interest in them and talk with them about himself.

Walk away: Instead of going out with your friends, he talks about building a crawl space. He uses every excuse in the book for why he should not socialize with them. Even when he makes an attempt, he is unable to connect. With disappointment, you realize that his social chip is missing and that you cannot replace it.

Are you obsessed with love? Find out here!