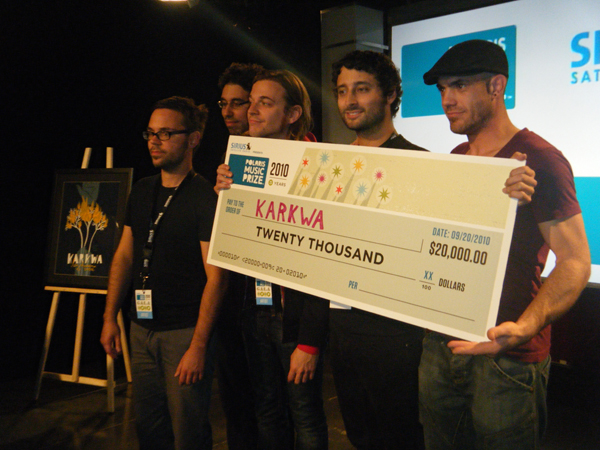 In another surprise at the always-unpredictable Polaris Prize gala, Montreal band Karkwa took home the award for best Canadian album of the year last night, beating out the likes of Caribou, Tegan and Sara, the Sadies, Shad and Broken Social Scene.

It’s the first time in the award’s five-year history that a francophone act has won, and the band members look gobsmacked as they accepted the $20,000 prize for their album Les chemins de verre, a collection of beautifully atmospheric, melodic rock songs that has drawn comparisons to Radiohead.

“I was almost hoping it would not be us because I didn’t know what to say in English,” singer Louis-Jean Cormier joked afterward. “It’s a contest that we respect so much because it’s all about the music, not the sales or the promotion,” added drummer Stephane Bergeron.

All 10 short-list nominees performed at the gala at Toronto’s Concert Hall, and it seemed everyone brought their A game. Vancouver singer- songwriter Dan Mangan jumped from the stage to the nearest table to encourage the audience to sing along on “Robot,” while Broken Social Scene, Karkwa and Radio Radio—a hip-hop group that sings in an Acadian dialect called Chiac—all beefed up their sound with double drummers, Owen Pallett added a fabulous all-female horn section to his spellbinding performance and even Shad brought a string section to back up his brilliant rhymes. Pallett also played backup violin for Tegan and Sara’s set, after the crowd sang “Happy Birthday” to mark the twins’ 30th. Still, it was Caribou who stole the live show at least with an exhilarating performance that featured an all-male, white-clad horn section. Frontman Dan Snaith, meanwhile, was resplendent in white with a rainbow-coloured windbreaker and pink socks, no shoes.

Read more on other nominees

It was a year when any of the short-list nominees could have taken the prize, but not many people predicted a win for Karkwa, who are well established in Quebec but virtually unknown in English Canada. Still, providing exposure to underappreciated bands is perhaps the best thing about Polaris. “We were so surprised and excited to make the short list, because we sing in French,” said Cormier. “Now we’re standing here in Toronto with the Polaris Prize and we are starting to think that we should make an effort to play here and across the country—and even in the U.S., because music is a universal language. This proves it.”