Just because the leaves have fallen and the cold weather is upon us, doesn't mean it's time to stop rockin'. Check out three of ellecanada.com's favorite new albums and beat the winter blahs one beat at a time. 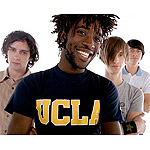 Like everyone else who wants to beat those pesky internet pirates, Bloc Party released their latest album, Intimacy, digitally before its Oct 27th CD release and leaked single ‘Mercury’, three days before that. For Bloc Party fans who were disappointed by A Weekend in the City, you’ll be happy to know that Bloc Party is back to the original fervor associated with debut album, Silent Alarm.

Don’t be put off by experimental first track “Ares”, it’s not what you typically expect from Bloc Party but it’s interesting and after a few spins, really cool. Russell Lissack (lead guitar) shreds it fairly heartily in radio friendly “Halo” and Kele Okereke mesmerizes with haunting vocals in classic Bloc Party ballads, “Biko” and “Zephyrus”. The best part about Bloc Party is their ability to calculate and compose the exact amount of percussion and synth to pull off edgy, rather than cheesy; listen to “Trojan Horse” and you’ll see what I’m getting at.

Utilizing chimes throughout “Signs” over an amalgamation of synth sound effects, warm beats and strings, we hear something different from Bloc Party; a captivating tune full of musical intrigue. This track proves the most inventive on the disc and my choice for the song you’ll rewind over and over. Do we still call it rewind when nothing technically winds? Hmmmm.

The album continues to supply danceable anthems bouncing from riff heavy “Talons” and morphing into the dreamy, lighters-in-the-air “Ion Square”. I’ve heard some stuff from skinny-jeaned hipsters complaining this album is ‘over-produced’, but I disagree and blame that opinion on cut-off circulation. Great production makes good albums even better, which happens to be the case with Intimacy.

A return to the sound of Silent Alarm makes this Bloc Party album a fan-pleaser, one I can’t wait to see performed live (hint hint, come to Toronto).

The Waking Eyes
Holding On To Whatever It Is
Warner Music

We haven’t heard much from Manitoba’s The Waking Eyes since Alexisonfire defeated them for New Group of the Year at the 2005 Junos – and for the record – weak decision Juno jury.

The Waking Eyes are the kind of Canadian band we ought to be proud of. The bands made up of Rusty Matyas, Joey Penner, Matt Peters and Steve Senkiw. I could include what role each member performs, but honestly, it would be far too verbose as each “Waking Eye” performs every duty from vocals to keyboards to harmonica and guitar.

These boys are true musicians, drawing comparisons to Coldplay and The Fratellis, but with their own creative take. The musical palette presented on their latest effort, Holding on To Whatever It Is, showcases a band that has taken time to learn about themselves, their style and how to work as a musical collective to create an album both inventive and listenable. It’s hard to classify the album into one genre, which isn’t necessarily a bad thing. Think about how diverse Queen was, and we all know that anyone who doesn’t like Queen can’t be trusted. Although they have a long way to go until they hit Queen status, these guys have a way of presenting rock and pop that would make even Brian Ferry shake his curly mane like a Pantene Pro V commercial.
“Keeps Me Coming Back” and “Masters of Deception” reminds us that The Waking Eyes know how to rock (even if they’ve dropped in a nod to Destiny’s Child in the latter).
Cue the pop hits with 80s inspired “Boyz and Girlz” and potential The Hills soundtrack song “Trouble on the Patio”, a sweet ditty about finding the right love. My favorite track is “Digital Glue”, a soulful and full-bodied ballad sung over triumphant horns and heartfelt keys.

The Waking Eyes will open your eyes to what grassroots talent and well-thought out music is meant to sound like. They’re touring this album, as we speak, so try to make it out to one of their shows; you won’t be disappointed. Holding on To Whatever Is, is in stores now.
Girl Talk
Feed the Animals
Illegal Art

It seems like everywhere you turn these days, you hear something about Girl Talk, no not the fodder of 12-year-olds at slumber parties, but the music mash-ups courtesy of Gregg Gillis. The 27-year-old from Pittsburgh, Pennsylvania seems to have thrown a whole new dilemma into the mix with his sample heavy tracks. The former biomedical engineer has been releasing ‘mash-up’ albums since 2002 and seems to have really hit the nail on the head with his latest effort Feed The Animals. Not only has he hit a few nails, but he’s ruffled a few feathers as he’s used 300 samples to make the freshest DJ mash-up set, well, ever. When you can somehow manage to find a way to mix Dr.Dre and Styx, throw some Avril Lavigne over Jay Z’s “Big Pimpin’” quickly followed by the Jackson 5’s “ABC” mashed with Queen’s “Bohemian Rhapsody”, it’s safe to say DJ Girl Talk has a rare gift. Throughout all of this musical chaos, he weaves recognizable blips like the recognizable ‘la la la la’s’ we know from Yael Naim’s “New Soul” (the Mac Air Book ad) or Jimmy Hendrix interrupting the action for a quick, ‘scuse me while I kiss the sky’.

Here’s the problem: none of the samples that he’s found a way to connect with beat matching and creative rhythm manipulation, have been legally cleared. What does this mean? So far not too much, it seems as though the artists he’s managing to connect don’t really mind … yet. If this press continues and money starts really rolling in, we’ll see how laissez-faire the rest of the music industry is about this issue. Following in the footsteps of Radiohead, Greg Gillis released Feed the Animals as a pay-what-you want effort; those who chose to pay $10 would receive a physical copy of the CD that is yet to be released. Whether you download the album through production company Illegal Art, or wait for in to be released in CD form, get this CD. I can safely say with a musical array ranging from Rod Stewart to T-pain, this album is truly for everyone.

Have a listen to this month’s album recommendation and let me know what you think! Shoot me an e-mail at [email protected]. Until next time, go forth and make sweet melodies.