Women grin and bare it all in How to Look Good Naked. 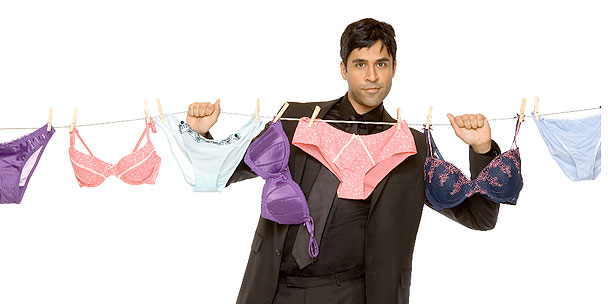 The mere mention of “pool party,” “bikini season” or “sex with the lights on” is enough to make most women cringe, whether they’re catwalkers or not. Zain Meghji — the ambassador of nakedness — wants to change that. According to the host of the W Network’s new reality show
How to Look Good Naked Canada, it doesn’t involve fad diets, crazy workout regimens or costly nips and tucks. It’s about coming face to face with your own reflection and lovin’ what you see. Meghji, who began his career in theatre productions and later became a reporter for CTV’s
eTalk, believes that his own past body-image issues give him some insight into what contestants are thinking when they strip off their clothes for the show’s famous mirror reveal and lineup. “I always wanted to look like Ryan Reynolds!” says the Vancouver native, laughing. “Growing up, I wasn’t comfortable in my own skin, so I can understand women’s insecurities.” Each episode follows one woman’s journey to naked confidence, from the mirror to the
fashion runway to the photo shoot in the buff. Experts — including ELLE Canada’s Rita Silvan — are brought in to offer style and beauty tips because, as Meghji says, the goal is to “accentuate the best and dress the rest.”

On the set of
How to Look Good Naked Canada, ELLE spoke with Kitchener-based single mother of three Pam Lahey about her bold decision to bare all.

Why did you decide to be on the show?

“I was unhappy with the way I
felt about my body. I was feeling old, unattractive and dumpy. Add to this, my growing dissatisfaction with where I was in my personal life and I knew I had to do something to shake things up. That is when I saw the ad for
How To Look Good Naked Canada and thought that just might be the ticket!”

What did you hope to get out of the show?

“I hoped to get a better image of my body and myself because I want to
feel younger and I want to have the confidence to go after my dreams and make them reality.”

What was Pam’s most emotional point on the show? Find out on the next page …

How does your lack of self-confidence hinder you?

“It prevents me from letting go and having fun because I am always conscious of my body parts that don’t work for me! I am worrying about whether others are noticing that my tummy protrudes and my butt droops.”

What were your expectations going into the first meeting with Zain Meghji and the Mirror Moment?

“I really didn’t have any expectations. I was too afraid to anticipate anything! I just hoped I would feel comfortable with the man I would have to spend some painful moments with. And Zain was sooo fun to work with! Once I realized that I was going to have to examine my body in my bra and underwear in front of a man — I just met — I was embarrassed and a tad humiliated, but facing my own inadequacies was one of the most emotional moments of the show for me.”

Was there anything that surprised you about that day or the process?

“Surprising? That I got through it without breaking down into hysterics!”

What was your reaction when you came out and saw the other women in the lineup?

“Shocked and uncomfortable! I am not in a position within myself to judge others publicly. But, like all other women, I secretly want to measure up but was too embarrassed and not bold enough to put myself where I wished to be.”

Did you feel that the process was exploitive in any way?

“No. In fact throughout the show everything was done with tact and discretion.”

What do you think other women will get out of your experiences and watching How to Look Good Naked?

“I hope it helps them put their own body images into perspective and prompts them to take chances that will add excitement and bring opportunity to their lives.”

*How to Look Good Naked Canada airs on the W Network, Tuesdays at 10 p.m. E/P.