Wiz Khalifa likes fans to smoke Cannabis at his concerts because it makes them ''chill out''. 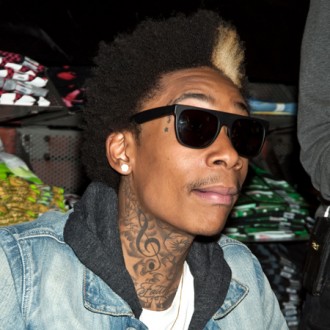 Wiz Khalifa likes fans to “chill out” by smoking Cannabis at his concerts.

The ‘Black and Yellow’ rapper makes no secret of his love for smoking the illegal drug himself, and claims he prefers it when venues turn a blind eye to his fans smoking during his stage shows, because it makes them more relaxed.

He told Forbes.com: “When the venues are not [ok with people smoking weed], we respect it and the fans respect it. And when it is friendly, then people know. The high, I don’t think that ruins anything, it makes people chill out.

“And then when you tell them they can’t smoke weed, they find other creative ways to get high that’s less constructive.”

He also defends the drug, saying it is a way of life for many people and integral to his own persona.

Wiz added: “Everybody smokes weed. My music and my fan base is really built off of my lifestyle – and from older people to doctors, plenty of really successful people function off weed.”

Despite his love of marijuana – which has previously been linked to memory loss and schizophrenia if abused over a long period, and often makes users drowsy – Wiz says he remains productive and hardworking at all times.

He said: “I just want to expand my brand organically and naturally, like people are used to seeing from me, and I don’t want to move too fast.

“The work I put in five years ago got me where I am now. Every day I wake up is a work day, and I don’t plan on chilling out anytime soon.”