Willow Smith loves rap as well as pop music, and listens to artists ranging from Miley Cyrus to Tupac Shakur. 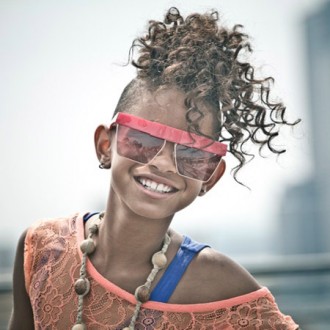 The 10-year-old ‘Whip My Hair’ singer, daughter of actors Will Smith and Jada Pinket-Smitt, likes rappers as well as pop stars, naming the ‘California Love’ hitmaker – renowned for using foul language and graphic sexual imagery in his lyrics – as top of her list.

She said: “On my iPod I have Miley Cyrus, Lady Gaga, Beyonce, Billy Idol, B.O.B. Eminem, Tupac – he was my mom’s best friend.”

Budding star Willow said she won’t be following the career path of Tupac – who lived on the wrong side of the law for most of his adult life and was shot dead in a suspected gang related incident in 1996 – however, instead hoping to base herself on ‘Only Girl (In The World) singer Rihanna.

She added: “I think Rihanna’s awesome, I’d love to be a baby Rihanna!”

Willow has also had the opportunity to meet some of her musical heroes, telling how Jay-Z – who has signed her to his Roc Nation label – gave her some good advice.

During a US radio interview she explained: “It was really fun! He was really welcoming, and he was funny, supporting and I just felt welcomed.

“He just told me to have fun”.

‘Whip My Hair’ has been a huge internet sensation, gaining millions of views on youtube, and will be released in the UK on December 6th.