Velvet Revolver have confirmed they have recorded tracks with Slipknot vocalist Corey Taylor. 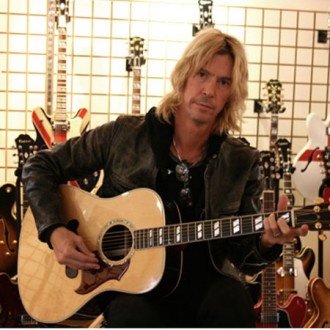 The singer has been linked to the rock supergroup as replacement for Scott Weiland – who left in 2008 – for months.

However, while bassist Duff McKagan has finally confirmed they have worked together, he is reluctant to say if he will be a permanent member of the group.

Duff – formerly of Guns N’ Roses – told Music Radar: “We recorded a bunch of songs with Corey. I think he’s f***ing great – he’s the best voice of a new generation and I’d be proud to do anything with him.

“But the truth is, I can’t see Velvet Revolver happening until fall.”

Referring to the group’s guitarist, he explained: “Slash is touring, I’m just starting to tour – we’ll just have to see. I don’t have an answer.”

The group – which also features another ex-Guns N’ Roses member, drummer Matt Sorum – all have busy schedules, as they are involved with other groups.

Duff has his band, Loaded, while Slash is still touring in support of his first solo record, released last year. Matt plays as part of another rock supergroup, Camp Freddy, and runs his own clothing line.

Corey is scheduled to tour with Slipknot this year, and also has his side project Stone Sour.