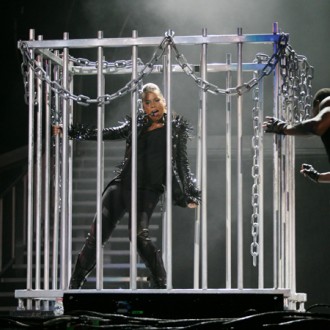 Usher and Alicia Keys were the big winners at the Soul Train awards 2010 in the US.

‘OMG’ hitmaker Usher and ‘Empire State Of Mind’ singer both scored two awards at the show – which was aired on TV yesterday (28.11.10) – with Alicia named Best Female R’n’B/Soul Artist and also winnin gthe Record Of The Year (Songwriter Award) for her track ‘Unthinkable (I’m Ready)’.

While neither was on hand to collect their awards, the night was packed with star studded performances from R.Kelly – who sung a medley of his hits including his classic ‘Bump And Grind’, Ne-Yo; who sung ‘Champagne Life’; Cee-Lo Green and Bruno Mars, who performed his track ‘Grenade’.

Two Legend Awards were given, to ‘Sweet Love’ soul singer Anita Baker – who was left in tears by a 15 minute musical tribute in her honour by a host of stars – and Ron Isley, lead vocalist with The Isley Brothers.

He said: “The main thing is to make myself a better man, a different person, life span – a couple of years from now I’ll still be doing music, a few years after that – well, still doing music. I’m a music lover!”