U2 make their records in a way which makes them sound ''like they didn't try too hard,'' according to their long time producer, Steve Lillywhite. 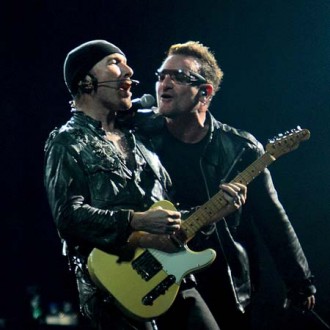 U2 make their records in a way so that they sound “like they didn’t try too hard”.

The ‘Vertigo’ band work meticulously in the studio, but always aim for their albums to sound effortless and full of energy, according to long time producer, Steve Lillywhite.

He told theartsdesk.com: “They’ve been able to afford themselves a style of making music that is unique. They go off on tangents, they try everything, and good luck to them – it doesn’t matter to me how long it takes to make a record, as long as it doesn’t sound like it took that long. It has to sound like they didn’t try too hard.

“This is what makes them such a great band: for them ‘good’ is about the worst thing you could ever say. When they have a new record coming out it has to have that wow factor.”

Steve has worked with the group – singer Bono, guitarist The Edge, drummer Adam Clayton and bassist Larry Mullen Jr. – on a number of their albums, including 2004’s, ‘How to Dismantle an Atomic Bomb’, and explained how lead single, ‘Vertigo’, took shape.

He added: “Basically, the moment he started singing the song with the band, Bono projected himself a year into the future, on a stage at Madison Square Garden, and he suddenly realised he couldn’t sing it with the passion he really wanted.

“So he decided to rewrite the words and melody. Bono had a rhythm for the chorus but he couldn’t get the words, and he was trying and trying.

“Eventually, after changing the chorus, changing the words, the final version of ‘Vertigo’ just sort of leaked into life. It has become one of their top five songs. It’s one of those songs that, if they’re having the worst gig in the world, they know they can pull it out and get the crowd back.”