U2 had the highest-earning tour of the year after grossing more than $293 million from their 44 gigs in 2011. 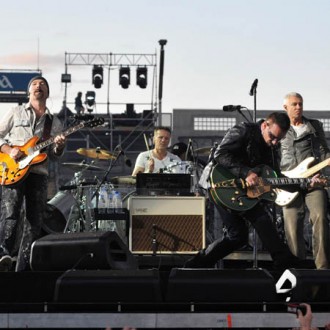 The ‘Sweetest Thing’ rockers grossed more than $293 million at 44 concerts, watched by almost three million people, as their record-breaking 360 Degree tour concluded with a string of dates in North America, according to Billboard magazine.

During the tour – which lasted three years in total – the band, made up of vocalist Bono, guitarist The Edge, bassist Adam Clayton and drummer Larry Mullen, beat a record set by The Rolling Stones for having the highest grossing tour ever, taking $763 million in total.

Bon Jovi fell from last year’s number one spot to second on the list in 2011 after raking $193 million from 68 shows, while Take That’s summer ‘Progress’ tour – their first time on the road as a five-piece since 1995 – generated $183 million to put the band in third.

Pink Floyd’s Roger Waters and Taylor Swift made up the top five in the list, which was based on tours that took place between November 1, 2010 and November 8, 2011.

Lady Gaga made more than $71 million with over 45 shows in her The Monster Ball tour, which concluded in May, while Dutch violinist Andre Rieu and soul band Sade made surprise entries at the bottom of the top 10.