The Wombats proudly present 'This Modern Glitch' in London

The Wombats launched their second album 'The Wombats Proudly Present... This Modern Glitch' with a special secret fan show in London last night (14.04.11) 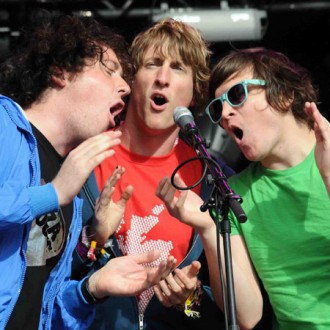 The indie rock trio played an exclusive concert for fans at the Supperclub venue in Notting Hill, West London, to celebrate their second album, performing every track from it as well as selections from their back catalogue.

The band were attired in best dress for the occasion, with drummer Dan Haggis wearing a waistcoat, bassist Tord Overland-Knudsen in a dickey bow and singer Matthew Murphy in a shirt and suit jacket.

Introducing new track ‘Techno Fan’, Matthew told the audience: “We haven’t played in West London for years – well, actually that’s a lie, as we played Hammersmith about a month and a half ago.

“Well, we haven’t played in Notting Hill for a long time then. The last place we played here had a stripper’s pole in the centre of the room.

“Anyway, this is a song about a night out I had in East London – see how I linked that in there.”

Set highlights included ‘Our Perfect Disease’, single ‘Jump into the Fog” – which was backed by a 3-D effect video – new album closer ‘Schumacher the Champagne’ and old favourite ‘Moving to New York’.

The show was broadcast live on the internet through the band’s website, and the night ended with the group urging everyone to make use of the free bar.

‘The Wombats Proudly Present: This Modern Glitch’ is released on April 25 and the band are on tour through the UK in September.