The Darkness find it much easier to play shows now they're sober and drug free. 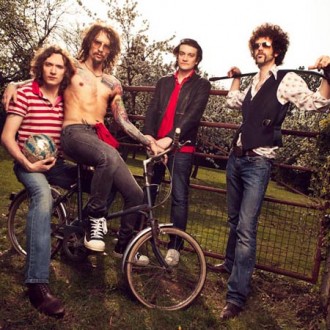 The Darkness find it much easier to play shows now they’re sober.

The ‘I Believe in a Thing Called Love’ rockers – who originally split in 2006 over drug problems within the band – are making their comeback this summer with a string of shows and festival appearances, and find their newfound sobriety makes playing their sets much better.

Speaking after three low key comeback shows, guitarist Dan Hawkins told BANG Showbiz: “The last two or three gigs It’s a new experience for me, I won’t lie to you, but it’s been great. It’s actually a lot easier to play when you’re sober. I know it sounds like the most obvious thing in the world, but it really is.

“Now we’re just doing music, we’re not doing all the other stuff we used to do. All that stuff is the baggage that drags it down and makes it not real and enjoyable”

Speaking at the Kerrang! Awards 2011, his brother, singer Justin added: “I’m used to it now, I’ve been sober for a long time, I don’t find it too bad.”

Although their sobriety helps them play their instruments, the band’s comeback shows have, however, seen them affected by nerves.

Dan added: “The first show went at about 100 miles an hour we played everything so fast, it was a speedy show. The second one calmed down slightly then the third one was exactly as we wanted it to be.”

The Darkness today (10.06.11) announced a 14 date UK and Ireland tour for this November