Status Quo will be honoured with a lifetime achievement trophy at the Silver Clef Awards 2011. 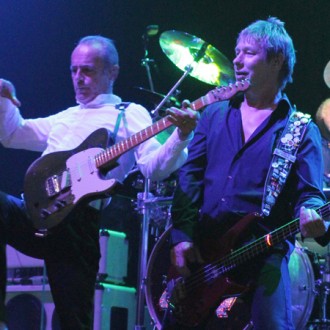 Status Quo will be honoured for their career at the Silver Clef Awards 2011.

The ‘Rockin all Over the World’ group – who have have over 20 top ten hits in the UK over a forty year career – will pick up the Lifetime Achievement Award at the event, which supports the Nordoff Robbins charity, which helps vulnerable people through music therapy.

The ‘Down Down’ rockers said in a statement: “We’ve supported Nordoff Robbins for some time. The work they do, helping people through music, giving them hope, is a really amazing thing.

“We are proud and honoured to be receiving the Lifetime Achievement Award at the Silver Clef Lunch.

“To be receiving this Award from an organisation who have been transforming lives through music for over 50 years makes this an even greater honour.”

Status Quo were previously awarded the Silver Clef Award in 1981 and they hold the record for having recorded 64 charting British singles, more than any other single band.

Other winners who have previously been announced at the awards are Annie Lennox, who will receive the O2 Silver Clef Award, Tinie Tempah who takes the Best Newcomer award and Alfie Boe who gets the Classical Award.

A host of other winners are expected to be announced when the awards take place in London on July 1.