Slipknot promise most emotional ever shows

Slipknot promise to play their ''biggest and most emotional'' ever shows when they tour Europe this summer. 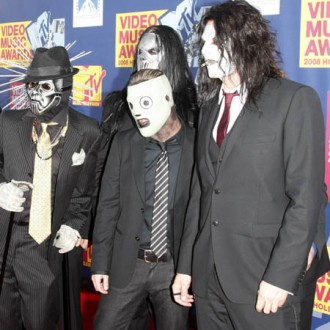 Slipknot promise to play their “biggest and most emotional” shows ever this summer.

The ‘Spit It Out’ group will return to performing for the first time since bassist Paul Grey died of a drugs overdose last May, and although they admit it will be hard without him, they will put their all into their shows.

Percussionist Shawn Crahan said:”I’ll be in tears before I even hit the first stair. And I need it very much – and we need it. So I’m looking forward to it, but it’s gonna be very hard.”

Drummer Joey Jordison added: “I’ve been in rehearsal over the last few weeks with our new bass player, Donnie Steele, and my feeling is that these will probably be the biggest and most emotional shows that we’ve ever had.

“I’m just speaking for myself and the rest of the band that we can’t wait. Everything’s on fire right now.”

The pair also confirmed they are hoping the group will continue, write more material and release a fifth album after the tour is done.

Shawn said: “Do I want another Slipknot record? Absolutely. I’m not a fortune teller. Do I know if that will happen? I don’t know.”

Joey added: “As far as I’m concerned, yeah. I personally have, now- I don’t know, probably over 17 songs.”

Slipknot will headline the Sonisphere festival, which takes place in various countries across Europe, this summer.