Slash to return to Stoke

Slash is set to play a show in the British town where he was raised, Stoke-on-Trent, returning for the first time since he was five. 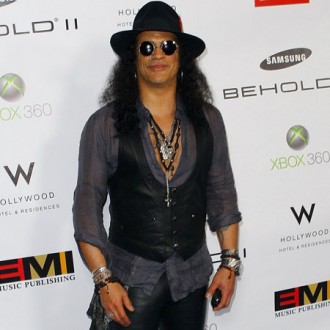 Slash is set to play his first show in his British hometown, Stoke-on-Trent.

The former Guns N’ Roses guitarist will play in the British midlands town for the first time during a tour of Europe later this summer, his first visit since he was five.

He wrote on his twitter page: “Last show of South American tour tonight in Cordoba! Then home to work on new record until Euro tour in July! Its gonna be epic! *wink* (sic)

“Actually its more of a UK tour w/some Euro dates thrown in. We’re playing Stoke! Its my 1st visit since I was 5 yrs old. *wink* (sic).”

Slash was born in West Hampstead, London, to an English father and an African-American mother but the couple soon moved to Stoke-on-Trent, then to Los Angeles, where he would become involved in music.

The ‘By the Sword’ rocker has been touring in support of his debut, self-titled, solo album, and as part of his summer dates, has also been confirmed to appear at this year’s High Voltage festival, which takes place in London’s Victoria Park on July 23 and 24.

The show will be Slash’s only festival appearance in the UK this year, and he will be joined on the festival’s bill by Judas Priest, Dream Theatre, Thin Lizzy and Jethro Tull, among others.