Slash wants his second solo album to have an ''as live feel'' so is recording everything in one take, meaning there could be some ''sloppy'' guitar solos. 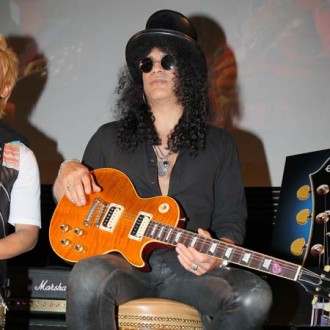 Slash’s musicianship may be “sloppier” on his next album.

The former Guns N’ Roses star is returning to the studio with his backing band to complete work on his second solo album, and is going for an as-live sound.

He told Total Guitar magazine: “We’re just going for the one take that sounds good, so my solos are more raw, probably sloppier in a way, because they’re very spontaneous to the point where it’s in the heat of the moment.

“Everything is being played live with the music tracks: the solos, everything. We’re trying not to overdub extra bits. So if there’s a solo, I’m playing on one side, singer Myles [Kennedy]’s rhythm track is on the other.”

The rocker admitted working on the album has been the most fun he has had in the studio since the early days of his career.

He told The Pulse of Radio: “I definitely have found a certain freedom to be able to feel comfortable expressing myself with the guys that I’m working with, and just being able to focus on what it is that I like to focus on, and not having a lot of outside distraction and internal distraction and confusion. This has been the most fun that I’ve had since the earliest Guns N’ Roses days.”