Sir Elton John celebrated his 3,000th ever show performing his The Million Dollar Piano concert in Las Vegas this weekend. 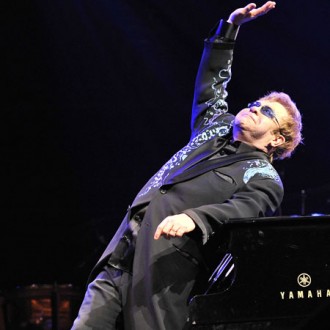 Sir Elton John celebrated his 3,000th ever show in Las Vegas this weekend.

The ‘Rocket Man’ hitmaker took to the stage at The Colosseum at Caesars Palace for his The Million Dollar Piano concert on Saturday (08.10.11), after which he celebrated with the audience and a large cake with ‘EJ3K’ written on it.

Elton started his concert career with his first ever public show on March 25, 1970 at the Revolution Club in London and has since played across the world in Europe, Asia and America.

Elton, 64, started The Million Dollar Piano in the US gambling capital last month, explaining to the crowd how it was named after the piano he uses, which was especially built for him by manufacturer Yamaha over four years and cost a reported $1 million to produce.

The piano – named Blossom after jazz singer Blossom Dearie – lights up with colours and imagery to reflect the mood of each of his songs.

Even though he has been playing for 41 years, Elton promised he is still innovating and his latest show is different to any he has previously staged.

He said: “This isn’t like the old days. It’s going to be certainly different from anything you’ve seen from me before, as was my last show, The Red Piano.”

Elton will play another nine shows in Las Vegas this month, before heading out on an international tour throughout November and December.