Roger Waters thanks fans at The Wall Live 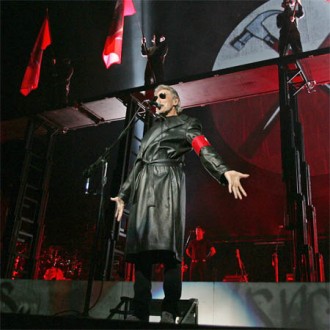 Roger Waters paid tribute to his fans as he performed ‘The Wall Live’ in London last night (18.05.11).

After completing his sixth sell-out concert at The 02 arena, the 67-year-old musician revealed he had never been “happier” on stage and admitted his attitude to his fans had completely changed since he released Pink Floyd’s seminal rock opera in 1979.

He told the audience: “Thirty years ago when I wrote this piece I wasn’t too good with rock ‘n’ roll audiences but, as you know, times have changed and I couldn’t be more happier than to be here with all of you. Thank you! Thank you from all of us.”

He then took a bow with his band and the children who joined him on stage for his performance of ‘Another Brick In The Wall, Part 2’ -complete with a giant grotesque teacher puppet.

Roger was inspired to write ‘The Wall’ LP and create the original 1980 stage show – which features a huge wall being built in front of the audience – after becoming disillusioned with disruptive fans during Pink Floyd’s ‘In the Flesh Tour’, which culminated with him spitting at a fan on the final concert date at the Montreal Olympic Stadium on 6 July 1977.

The bassist and his group played the album in its entirety and throughout the first act the wall is built up around the musicians brick-by-brick until at the end of ‘Goodbye Cruel World’, the last brick is put in place and the structure covers the entire stage.

It is then pulled down at the end of the song ‘The Trial’, amid chants of “tear down the wall”.

Other highlights in the show included Roger performing ‘Mother’ accompanied by video footage of him playing the same song live 30 years ago, a Stuka dive bomber plane flying over the audience and exploding into the wall at the conclusion of ‘In the Flesh?’ and Roger dressed in black fascist attire interrogating the audience as spotlights shine down during ‘In the Flesh’ in the second act.