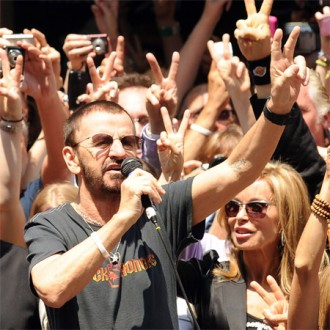 The former Beatles drummer tried to reunite with the only other surviving member of the legendary group, but joked he would only let the bassist and songwriter perform two of his own songs as part of his band’s set.

He said: “I ask Paul every time I put a new group together and I promise him two numbers like everybody else. And he always seems to be busy at the time!”

Ringo added he also approached guitarist George Harrison – who died in 2001 – to play with the group, but he had told him: “‘Ringo, you’ll have to give me all of the money’!”

The drummer played a four song set with the All Starr band – which includes musicians Edgar Winter, Gary Wright, Rick Derringer, Richard Page, Wally Palmar and Gregg Bissonette – at a press conference where he announced a new European tour, where Ringo admitted he is glad to be back on the road again.

He said: “We were approached, ‘Would you like to do Europe?’ So why not? I do it because that’s what I do. This is still the dream unfolding from when I was 13.”

Ringo also told how he loves his hometown of Liverpool, despite his saying in 2008 there was nothing he missed about it, prompting complaints from locals.

He clarified: “Liverpool is close to my heart, there are people in Liverpool I love – my family, my friends. They thought it was funny. There were three people from the Wirral who complained. There’s lots I miss, of course. I did that joke and I’m still paying for it, it seems.”