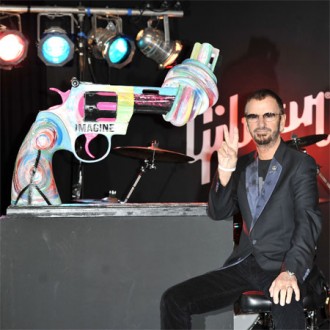 The drummer is still in close contact with his ex-Beatles band mate, but while they still like to get together from time to time, they don’t have any immediate plans to work together again in the future.

Ringo told BBC Radio 2 presenter Steve Wright: “He surprised me when I was playing Radio City Music Hall, and he got up and he played ‘Birthday’, which I played with him because I wanted the opportunity to ply with him again, and he’s on the last record, he’s not on this one.

“We do hang out a bit but we’re not in each other’s pockets, and if the opportunity is real, I’ve played on a couple of his records, he’s played on mine.”

Ringo – who is not known for his singing voice – jokingly added: ” But we never sit there and say, ‘oh yeah we’ll put it together’, I’ll do ‘Yesterday’ and ‘Hey Jude’, he’ll do ‘Octopus’s Garden’.”

There had been rumours the pair could reunite to play at the opening of the 2012 Olympic Games in London this summer, but Ringo has ruled any possibility of him being involved out, because he is on tour in the US.

He added: “There was talk about The Olympics last year, but I’m not here, I’m booked to tour America. I don’t know if he’s going to do it, but I’m off.”