Rihanna thought 'Battleship' would be the ideal film to make her acting debut in because it was the perfect role for her to transform her from a singer to an actress. 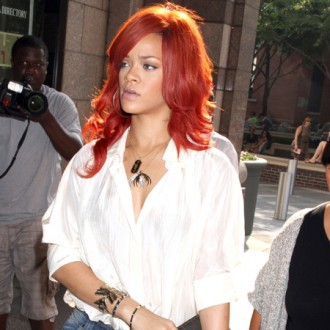 Rihanna thought ‘Battleship’ would be the ideal film to make her acting debut in.

The singer was keen to branch out into the film world and after she had read the script for the sci-fi invasion movie – based on the popular board game of the same name – she knew it was perfect for her.

She said: “After I read the script I was really, really impressed and I wanted to be a part of it. Plus it was a role I felt like I could handle for the first time I’m acting.”

However, Rihanna admits she wasn’t sure about the movie when she was first introduced to its director Peter Berg as she had no idea what was going on.

She wasn’t there, and I walked in. And Peter Berg just walked out and said, ‘Hi, come in’ and I’m like, ‘Where is Christa, my manager? Where is my manager?’

“She wasn’t there, and I walked in and all I saw were these little alien mock-ups, these little dolls. And he just started saying, ‘Yeah, these are the thugs, he’s a thug.’ ‘Uhh, okay,’ I laughed and then I realised that he wasn’t laughing, and I was like, ‘This is weird. Why are there pictures of aliens all over this room?’ And it was just crazy because he was just really super enthusiastic about it, and he was so sure that I could pull it off and I didn’t even know that he was the director of the film, I didn’t know anything. I didn’t know what I was doing, where I was going, why.”