Red Hot Chili Peppers want to play like a ''wildebeest let out of a cage that hasn't eaten in six months'' when they perform live. 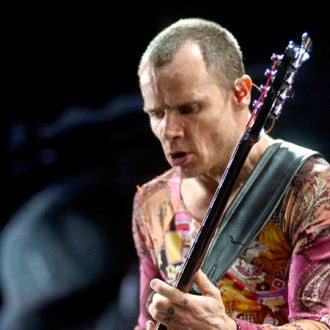 Red Hot Chili Peppers want to play like a “wildebeest let out of a cage that hasn’t eaten in six months” live.

‘The Adventures of Rain Dance Maggie’ group are currently on their I’m With You Tour in Europe and have just announced two huge dates in England next year, and promised they will be playing on full throttle.

Referring to shows at the iconic Knebworth Park in Southern England and the Stadium of Light in Sunderland, Northern England, bassist Flea said: “We’re going to do our best to play our hearts out, to let go of our brains and be animals, let the music flow and give every fibre of our being to the process.

“I just wanna explode. I’m going to brutalise Knebworth, like a wildebeest let out of a cage that hasn’t eaten in six months.”

Flea has also recently collaborated with Radiohead’s Thom Yorke and former Blur singer Damon Albarn and said he feels “fortunate” to be able to collaborate with such high profile musicians, especially when stars are more segregated than in previous eras.

He added to The Sun newspaper: “I love the sense of community in music with different people. I’ve been really fortunate through all of my life as a musician to play with great musicians.

“It’s like in the Sixties, all musicians played with each other, it was like, ‘Let’s do it’. Now everyone’s kind of segregated in to their little businesses – this is our thing, and we’re cool, and we have these haircuts over here, so we don’t play over there, whatever, we play this style of music.

“It’s all bull***t man. Get out and play some music with human beings, who cares about styles or anything – it’s music.”

Red Hot Chili Peppers will play in Ireland on Friday (04.11.11) before their tour moves to the UK next week, then Germany, Austria, Italy, Switzerland and Spain.

The band will then return to the UK in 2012 to play huge shows at Knebworth Park, Stevenage, on June 23 and the Stadium of Light, Sunderland, on June 24. Tickets for these shows go on sale on Friday.