Professor Green wants Lily Allen to come out of retirement to work with him on a new track. 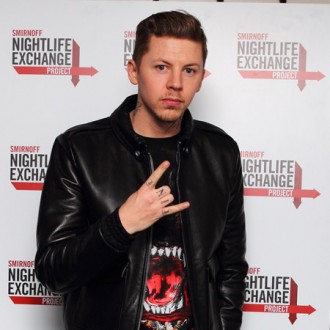 Professor Green wants to convince Lily Allen to come out of retirement.

‘Smile’ hitmaker Lily stopped making music in 2009 to focus on running her vintage clothing business, get married and have a baby but her protege, Professor Green, wants her to work on a new song with him.

He told the Daily Mirror: “I miss her as an artist but it feels weird asking her to work on a new track.”

Lily last appeared with the rapper – real name Stephen Manderson – on his 2010 single ‘Just Be Good to Green’, although she had recorded the vocals before her retirement.

He said: “When I had my 28th birthday, I thought, ‘I have to stop being scared of being happy’. Otherwise I’m going to get past this and think, ‘You idiot. You could have had so much more fun’.

“I’m not saying it’s a positive to go from one extreme to the other, but between November and January I’ve only had three nights not drinking and I did the best shows I’ve ever done. Alcohol isn’t the answer, it just played a part in me enjoying it.

“But I have more than enough examples from past artists to know not to go too far down that path. I’m enjoying it but it does scare the life out of me. You never know what’s around the corner.”