Noah and the Whale gave a sensational performance at London's Roundhouse last night (24.07.11), as part of the iTunes festival. 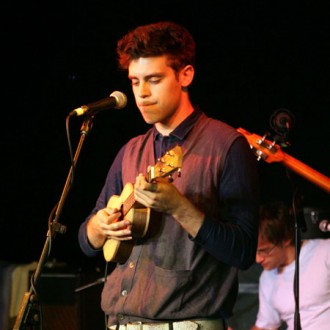 Noah and the Whale gave a sensational performance at London’s Roundhouse last night (24.07.11).

The band were playing as part of the month long iTunes festival at the North London venue, and performed a set which drew heavily from their latest album, ‘Last Night on Earth’, which has seen them embrace a bigger sound more suited to the larger venue.

Introducing recent single ‘Tonight’s the Kind Of Night ‘ frontman Charlie Fink asked the audience: “How you guys all doing tonight? I want everyone here to punch in the air during the chorus – it will be beautiful moment!”

Charlie has previously talked about how the album marks a shift in his song writing and a different approach to how he put songs together.

He said: “It was quite a transformative couple of years for me and I was looking to make a fresh start after the second album.

“It was a leap for me in terms of songwriting and it’s the first time writing characters, third-person narratives. Also a large theme of the album is change and people making a change in their life.”

Support act Fixers warmed up the crowd with a selection of songs including ‘Crystals’.

The iTunes festival runs throughout July and future shows include Kasabian, James Morrison and Moby.