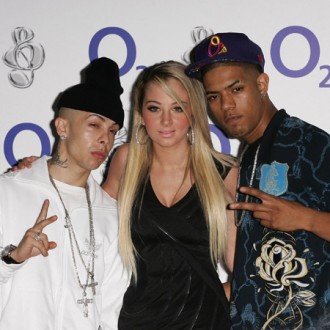 The London based hip-hop group are presently promoting themselves in the US, where lead rapper Dappy said he tried to teach the funk band his vernacular.

He said: “I had to tell ’em straight, ‘this might not be Shakespeare but this is how I talk, bruv’. They definitely didn’t get ‘Peng’. Peng means fit, sexy, good looking.”

The ‘Girls’ hitmaker – who stars in N-Dubz alongside singer Tulisa and producer Fazer – said the ‘Californication’ group’s frontman, Anthony Keidis, initially recognised him because of his trademark headwear – a beanie cap.

He added to Q magazine: “Anthony had heard of us, which was amazing. Well, he knew the hat – it’s, like, my calling card.”

N-Dubz recently revealed they are planning to take a fishing trip together after completing their next tour in April, to help keep their working relationship on track.

Tulisa said: “I love fishing. We’re all going to France together and are just going to camp by the river and fish every day and night.

” The trip’s more about Dappy and I, to sort of build up a relationship again as cousins.

“You get so caught up at work that you end up losing the family vibe and just hating each other as work colleagues.”