My Chemical Romance wrote the song 'Vampire Money' as a reaction to the 'Twilight' movies, which they declined to record a track for. 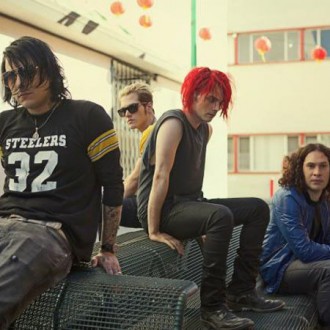 My Chemical Romance wrote the song ‘Vampire Money’ as a reaction to the ‘Twilight’ movies.

The ‘Na Na Na’ rockers were asked to contribute a song for the vampire film franchise’s ‘New Moon’ soundtrack, but frontman Gerard Way said despite being offered huge sums of money, the group refused because they had “moved on”.

He told NME magazine: “That’s why the song ‘Vampire Money’ is on our new album, because there’s a lot of people chasing that money. ‘Twilight?’ A lot of people around us were like, ‘please, for the love of God, do this movie.’ But we’d moved on.”

Gerard also said the group are not impressed with the current vogue for vampires and a gothic look – which My Chemical Romance adopted for their 2006 album ‘The Black Parade’ – and they have moved on in their mission to “polarise” and “irritate”.

He added: “Originally, what we did was take goth and put it with punk and turn it into something dangerous and sexy. Back then nobody in the normal punk world was wearing black clothes and eyeliner. We did it because we had one mission, to polarise, to irritate, to contaminate.

“But then that image gets romanticised and then it gets commoditised.”

My Chemical Romance’s new album ‘Danger Days: The True Lives of the Fabulous Killjoys’ is released on November 22.