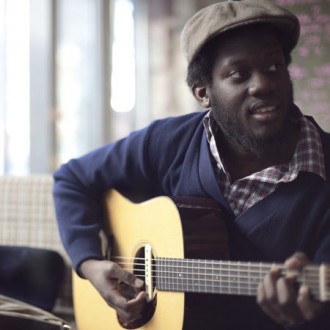 Michael Kiwanuka has been named the BBC’s Sound of 2012.

Speaking about the award on TV show BBC Breakfast, Michael said: “Sometimes you can feel the pressure because other winners have all been so successful, but the main thing is to concentrate on the music.

“It’s great for me and its encouraging because it means more people will hear the music, and that’s the aim really. Hopefully I’ll be successful, but if not I’m happy with the music.”

Michael studied jazz and worked as a session musician before going solo, and has toured with Adele and Laura Marling, who he credits with paving the way for his breakthrough.

He added: “Music is so eclectic now, the fact that young people and old people listen to the same things.

“I think artists like Adele have helped that, and her music is very current but then it reminds me of music from before. It’s just simple songs and simple singing, and it think people like her have helped people like me.”

Michael says his forthcoming album, ‘Home Again’, will show the breadth of his inspirations and admits he is a little nervous about how he will react being in the spotlight.

He added: “On the album there’s a bit of a mixture, a lot of its just me and guitar, then there’s other stuff that’s a lot more elaborate, it’s a mixture of folk and soul is the simplest way of putting it.

“I’m not sure how I’ll react to the spotlight, but hopefully the attention will be on the music and that alone.”