Metallica have ''two and a half years'' worth of material to sift through before they sit down to make their next album. 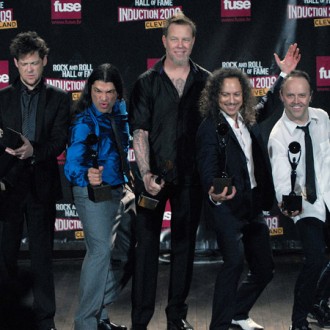 Metallica have “two and a half years” of material to sift through before they make their next album.

Lars Ulrich – the heavy metal band’s drummer – explained songwriter and vocalist James Hetfield has created more than 700 new guitar riffs for the group’s follow up to 2008’s ‘Death Magnetic’, and he thinks sifting through them all will be an “overwhelming” experience.

However, Lars joked that as the rockers won’t be able to use all of the music for their next record, they can give away the rest as ringtones.

He explained to Metal Hammer magazine: “James told me in Australia that he had over 700 new riffs. That was slightly overwhelming. It’s kind of frightening. James is not allowed to play guitar without being recorded. Literally! There are also hours and hours of jams and tuning-room shindigs.

“We’re gonna sit down and wade through two and half years’ worth of riffs and jams and hopefully a lot of the seeds for the next Metallica record will be in that. We can use the rest of the riffs for ringtones or, I don’t know, set up a web site, SpareRiffs.com.”

With Metallica having announced a number of gigs throughout Europe, Asia and America later in the year, Lars admitted he doesn’t want to overdo it on live performances to the extent that his fans “take it for granted”.

He told 93.3 KDKB radio: “It’s hard, we’ve got four different guys all with different things going on, so it’s pretty hectic. Everyone has got a full schedule but we’re managing to get together. I just don’t want to overdo it to the extent where it becomes something people take for granted.”