Martin Solveig uses dance music as a ''spiritual tool'' to bring crowds together where he plays. 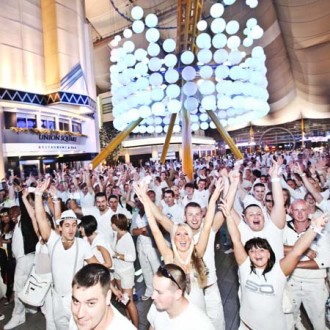 Over 10,000 of London’s biggest dance music fans crowded London’s The O2 this weekend for the Smirnoff presents Sensation dance event, where some of the biggest DJs in the world played including Fedde Le Grand and Sander Van Doorn.

He told BANG Showbiz: “If you just look at the crowd, everyone is happy and feeling good, and that’s what dance music is all about.

“It’s about bringing people together and using music as a much more spiritual tool.

“This has been a night that feels much more important than just playing music.”

Event organiser Duncan Stutterheim explained how the all white wardrobe choice for the night was not a gimmick, but a tribute to his own brother.

He said: “The dress code is down to my brother. The first time we did ‘Sensation’ the clothing was normal, but then my brother died. So at his funeral we did a white funeral, and as a tribute a few of us dressed all in white. About 30 percent of us. Then the third year, that rose to 60 percent. Now 11 years later and the whole crowd is in white. We always dreamed that the show would go to London, so I think he’d be very proud that we did it.”

The sensation event is currently touring around the world and will travel to Barcelona in October before heading for a New Year’s Eve spectacular in Dusseldorf.