M.I.A. pushing boundaries for herself

M.I.A. said she makes music to push the boundaries of her own creativity, rather than please anyone else, and thinks her record label may have ''forgot what it felt like to be punk.'' 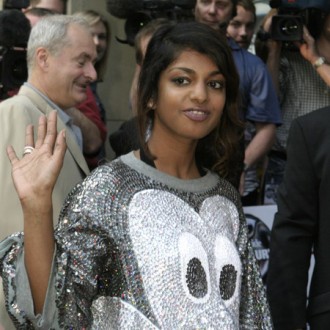 M.I.A. said she makes music to push the boundaries of her own creativity, rather than please anyone else.

The Sri Lankan singer said her last album ‘Maya’ contains the nihilistic attitude of punk music and that she made it in order to evolve as an artist rather than capitalise on her biggest hit, ‘Paper Planes’.

She said: “It was a huge shock for everyone, including my label. I think maybe it’s just that people forgot what it felt like to be punk.

“It was weird because people see it as a failure as opposed to something that celebrates art or champions art.

“It’s way more important for me to be creative and push boundaries in myself and for myself, because it’s part of my evolution and growth as an artist.

“I needed to go here to this particular place because my personal life is that contradictory and weird and insane, and it was trying to reflect that.”

While M.I.A. is fiercely political in her championing of the rights Tamil people in Sri Lanka, and there is often a political element to her songs, she doesn’t feel the two have to always go hand in hand.

Addressing the notion that critics have levelled at her she is “too subjectively emotional” in her tacks, she said: “I would’ve been a politician if I wanted to discuss politics in that way, but I like to stick at being, you know, a person who speaks about the experiences that I experienced, like I have the right to. All I can do is when I come across people going, ‘You know, in order to make music you have to be like this,’ I go ‘No, in order to make music you don’t have to be like anything, you just have to be musical.’”