Lydia Baylis was honoured to be invited to meet the Welsh Guards after announcing plans to donate the proceeds from her debut single to their Afghanistan Appeal. 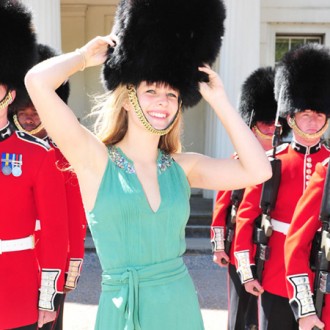 The singer is donating the proceeds of her current single ‘Starman’ to the army regiment’s Afghanistan Appeal and was delighted to be invited to spend the day with the soldiers at the Welsh Guards Changing of the Guard.

She said: “It was a great honour and a privilege for me to be invited by the Welsh Guards to attend a photo call while they performed their ceremonial duties. I was very pleased to be there to help raise awareness for the Welsh Guards Afghanistan Appeal because of my close family ties with the regiment and before the Welsh Guards return to active duty in Afghanistan next year.”

Lydia – whose father was an army serving officer and both grandfathers were in the Welsh Guards – would love to follow in the footsteps of stars such as Katherine Jenkins and be invited to perform for serving troops.

She added: “The politics of why the British are fighting in Afghanistan is not my concern, but on-going support of our forces and their families certainly is. These brave people put my existence in perspective in that, while I can entertain through my music , my work isn’t a matter of life and death like theirs is.

“I’d dearly love to entertain the troops in due course, even though Katherine Jenkins has beaten me to it!”

Lydia’s debut single ‘Starman’ is available to download at www.lydiabaylis.com now and will be released on CD on August 1.