Leona Lewis wants to work with Black Eyed Peas producer Will.i.am on her new album - sparking speculation she will head in a dance-music influenced direction. 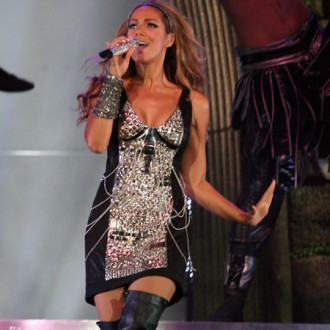 The English ‘Happy’ singer is presently working on tracks for her third record, and is keen to get input from will.i.am – who has previously been behind hits for Cheryl Cole, Usher and had worked with Michael Jackson before his untimely death last year.

Leona told the Daily Star newspaper: “I’d like to work with will.i.am, he’s very talented. I’m still in the early stages of my new record, so I’m having fun with the new sounds.”

‘Bleeding Love’ singer Leona taking a new direction on her next album, and she is thought to be heading in more of a dance music direction, having previously revealed she has worked on a track with French DJ and producer David Guetta. David has produced hits with Akon, Kelly Rowland and has worked with will.i.am himself, notably on Black Eyed Peas huge hit ‘I Gotta Feeling’.

Meanwhile will.i.am has explained how his aim as a producer is to take listeners on a musical journey from the 80s to the present day, something he has tried to achieve on the new Black Eyed Peas album ‘The Beginning’.

He said: “The 80s was unique. It launched humanity into hyper mode. From then to now we’ve transcended to a totally different culture.

“Now we have high definition, 3D animation, whereas the beginning was Tetris and Space Invaders. That’s what we’re doing with our record – we’re connecting the pixels.”