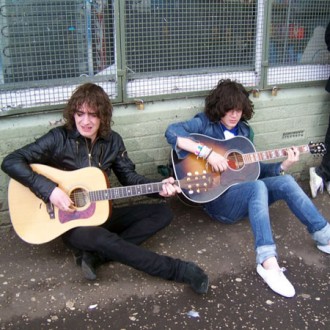 The Scottish singer practices songs from the 1971 rock opera on the band’s tour bus, but was once turned down from his dream part by an amateur dramatics society.

Explaining why he likes the Andrew Lloyd Webber and Tim Rice musical – which highlights the struggles between biblical figure Jesus and his betrayer Judas – Kyle told the Daily Record newspaper: “I’ve liked the character of Judas since I was a kid.

“When I was younger my sister showed me the film of ‘Jesus Christ Superstar’ and I was fascinated.

“I was intrigued by the psychedelic version. I thought Judas made a better point. He had better tunes as well. He is a deranged character and I’d really love to play him.”

The ‘Same Jeans’ hitmaker’s favourite songs from the production include ‘Heaven on their Minds’ and ‘Everything’s all Right’, and despite not winning the part at his first audition, he is adamant he will one day play Judas.

He said: “I once went for the part. I was pure perfect too. But they said, ‘no’. It was an amateur production as well. I will still nail it, but I’m not sure about when. Maybe in a few years.

“I’ll have to wait until it hits London again and get some elocution and dancing lessons .”

Meanwhile Kyle is set to tour the US with The View to promote their latest album, ‘Bread and Circuses’.