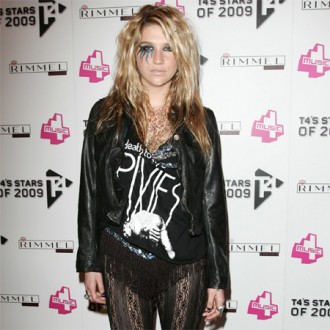 Kesha lived up to her outrageous reputation as she brought her ‘Get Sleazy’ tour to London’s HMV Hammersmith Apollo last night (14.07.11).

Opening with crowd pleasers ‘Sleazy’, ‘Take It Off’, ‘Dirty Picture’ and ‘Blow’, it wasn’t long before the 24-year-old singer strapped one of her male backing dancers to a cross before simulating tearing him apart and drinking from a heart for ‘Cannibal’.

The US starlet interacted with the audience between songs and explained how ‘Grow a Pear’ from her second album was inspired by her frustration when an ex-boyfriend wanted to talk rather than have sex.

She said: “This next song is a story about a boy. Instead of wanting to bone down, do you know what he wanted to do? Talk. On no no. So I did what any good woman would do, I wrote a song about it.”

Kesha then invited a male audience member on stage where she taped him to a chair and invited a giant penis to beat him.

‘Your Love Is My Drug’ and final song ‘Tik Tok’ performed with the help of backing dancers dressed as skeletons had the entire audience on their feet, before Kesha returned for an encore of ‘We R Who We R’and the Beastie Boys classic ‘(You Gotta) Fight For Your Right (To Party!)’.

Natalia Kills and LMFAO provided support with the latter getting the crowd on their feet with ‘Party Rock Anthem’.

‘Party At A Rich Dude’s House’

‘Your Love Is My Drug’