Katie Melua wants to perform a concert in space after touring Cern - the Eurpean Organisation for Nuclear Research - with former astronaut Buzz Aldrin. 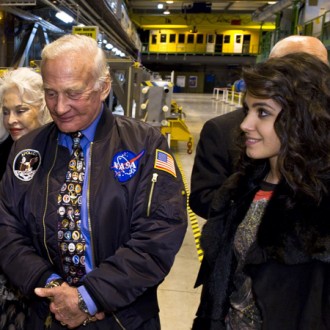 Katie Melua wants to perform a concert in space.

The ‘Closest Thing to Crazy’ hitmaker recently enjoyed a tour of the Large Hadron Collider in Switzerland with former astronaut Buzz Aldrin – who was the second man on the moon – and was so inspired by the trip, she now wants to be the first singer to play her tracks in another galaxy.

During her visit to European Organisation for Nuclear Research – known as CERN, where the Collider, a high energy particle accelerator is based – Katie chatted to Buzz about the possibilities of performing either on the moon or in a space ship.

She also performed three songs for the staff, ‘Nine Million Bicycles’, ‘I Cried For You’, and a new track called ‘Walk Lightly On The World’, which has been penned especially for Opel/Vauxhall’s green campaign, for which Katie is the brand ambassador.

Katie, 26, is no stranger to performing in unusual places, as in 2006, she set the world record for the deepest concert when she played at the bottom of the North Sea.

The singer underwent extensive medical tests and survival training in Norway before she was allowed to sing for workers on the Statoil Troll A gas rig, which is 303 metres below sea level.

She said at the time: “This was definitely the most surreal gig I have ever done. It took nine minutes to go from the main part of the gas platform down to the bottom of the shaft in a lift.

“Giving a concert to the workers there was something really extraordinary and an occasion that I will remember all my life.”

Other artists who have expressed an interest in performing in space include rockers Muse and ZZ Top.

Katie’s present European tour reaches the UK on April 22 and runs until June 21.