Kasabian's new album was inspired by their early days of excess but say they have since calmed down. 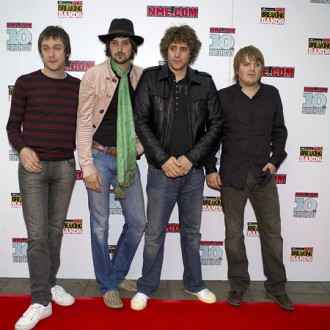 Kasabian’s new album was inspired by their early days of excess.

While the British group say they have calmed down as they prepare to release their fourth record ‘Velociraptor!’ in November, they love to reminisce about the wilder times when they first started out and even wrote a song ‘La Fee Verte’ about their experiences.

Guitarist Serge Pizzorno explained: “We’ve had some massive movements and some beautiful tomes. A few years ago we had excess after excess and it was incredible we survived, but we’re much calmer now. We were a battering ram who rode through it to where we are today.

“‘La Fee Verte’ is a song about not dealing with the real world and getting out of your mind. You know, going out for milk and not returning for three days. Seeing girls with dogs in handbags and watching ‘X Factor’ on the telly round at someone’s house.

“We still have those days, just less frequently.”

While the group believe the new album is a collection of the best parts of their first three records, they were happy to experiment on the record too as they believe it’s time to “move on”.

Serge added to The Sun newspaper: “We’re touching on bits of the first albums in parts. It’s like a collection of the best bits of the first three records. The Beatles moved on with each record and I think we have to.

“I guess this is the point where we almost say goodbye. Goodbye to what we were before and welcome the band we have become.”