Kaiser Chiefs give up bouncy songs

Kaiser Chiefs didn't want to write ''bouncy songs'' for their latest record, 'The Future is Medieval'. 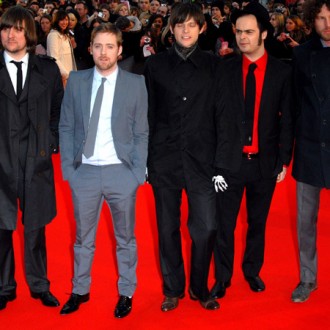 The group’s new album, ‘The Future is Medieval’, is “darker” than previous material as the band both feel they have matured and recordings were overshadowed by the illness of main songwriter Nick Hodgson’s father.

Nick told Gigwise.com: “It’s kind of ironic in that these songs are some of our least single-y that we’ve ever released, a bit darker. When we were younger we wanted to make bouncy tunes you could just go a bit mental to and jump around the room listening to, but life moves on and things change. These songs aren’t really like that.

“My dad’s been ill with Alzheimer’s. Obviously, that changes things.”

The group have also released the album over the internet so fans can choose which tracks they want to include out of 20 on a personalised version, which Nick said changed the way they viewed the record as they recorded it.

He added: “It gives you focus on each song. Ethan Johns who did production on the album didn’t like the concept when he heard it, because he’s really into the idea of the album as a whole, from A to B.

“But he liked the songs and wanted to work on it anyway and he decided the concept really suited the songs. There was a point when we went off the idea and he talked us back round to it.”

‘The Future is Medieval’ is out now.